What's the best way to save for Christmas? 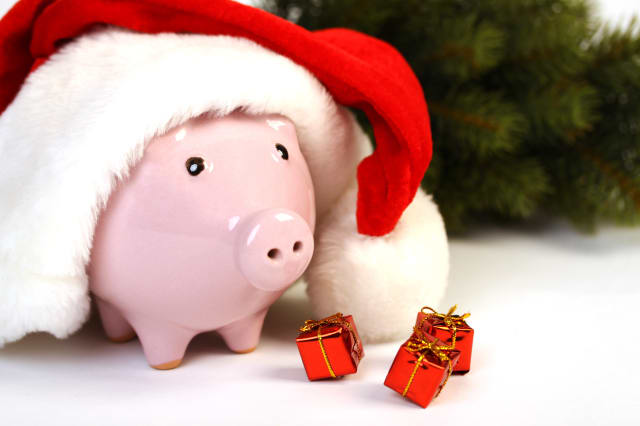 Christmas decorations are starting to appear in the shops, and the kids are talking about what they'd like from Santa. Meanwhile, we're worrying about how to pay for it all.

Brits will be spending a whacking £20 billion on Christmas this year, according to research from Halifax, but one in six people say it may take them all year to pay it all off.

Last year, we spent an average of £452.41 each, with booze, presents and the Christmas roast topping the list of expenses - and one in four say they're worried about the cost. Most people say they are hoping to cut back a bit on their spending this year, but most still worry about how they'll pay for everything.

"Although it feels like summer has only just passed, it's not long until the festive period, and some shops are already starting to sell festive stock," says Giles Martin, head of savings at Halifax.

"To avoid a bill shock, it's worth starting to save now to spread the cost over several months. It's reassuring to see that one in ten of us already do this, and save through the year or use a savings account to save up for big events such as Christmas."

The earlier you start saving, of course, the easier it will be. It helps if you can put the same amount by each week, and if you have a target in mind.

There's nothing stopping you just putting your money in a jar, but using a special Christmas savings scheme can help you avoid dipping into your cash too early. Here are some of the options.

Christmas clubs
Christmas clubs are run by retailers, social groups and the Post Office, and deliver your year's savings a few weeks before Christmas. They don't pay interest on the money, though, and you may be tied to spending your savings with particular retailers.

After the Farepak Christmas hamper savings club went bust ten years ago, many people have quite rightly been wary of saving for Christmas this way. Christmas clubs aren't regulated in the same way that other financial organisations are, and if yours goes out of business, you might lose all of the money you put into it. However, if the club is a member of the Christmas Prepayment Association (CPA), you should have some protection. You can check, here.

Credit unions
Some credit unions offer Christmas club savings schemes that work in much the same way as other Christmas clubs. There are, though, some advantages. You should be able to earn money on your savings, thanks to a dividend, and your money's protected by the Financial Services Compensation Scheme, so you'd get it back if the club went bust.

Credit unions bring together local people, church groups, or those that work in a particular business - anything that counts as a 'common bond'. You can find a list here to check whether you're eligible.

Building societies
Some building societies offer dedicated Christmas savings accounts - although you've missed the boat this time, as you can only open them early in the year. You'll be able to access the money a few weeks before Christmas and should get interest on your account.

Supermarket savings schemes
Many supermarkets let you save throughout the year using a saver card, with extra bonuses if you put in enough cash. Other schemes start in the weeks leading up to Christmas, allowing you to collect coupons when you do your weekly shop. The downside, though, is that you're obliged to spend your savings there, and can't shop around for a better deal.

Christmas gift ideas for kids
After the success of Pie Face last year, we should have known that the follow-up would be huge this year. Just load up the throwing arm with whipped cream and get ready to ruin your Christmas jumpers. John Lewis is selling it for a competitive £17.97.

No list for this Christmas would be complete without the hard-to-buy toy of 2016. Hatchimals come in at £64.99, but have been selling for much more on eBay as parents get desperate to snap them up.

The good news is that you don't need to panic and over-pay just yet. The manufacturers are continuing to deliver stock, so if you check in with the major players on a regular basis, there’s still every chance you will strike lucky before Christmas Day.

If you have a Star Wars fan in the family, then Rogue One’s release is probably more of an event than Christmas this year.

You can capitalise on the new Best. Film. Ever. by getting them an AT-ST Walker from the film. It's £39.99 from Tesco Direct.

Argos put this in its list of hot gifts this Christmas. There are three ways to blast foam bullets at your friends and family - which must surely be fantastic news for little sisters and slow-moving targets everywhere.

With a price tag of £59.99 from Argos it’s quite an investment, but you’ll get plenty of action for your money.

Just what the wannabe pop star needs - a microphone with a selfie stick, so you can film yourself singing along to your favourite tracks.

It might be a bit of a Christmas fad, but at £19.99 from Argos, it’s a relatively affordable one.

The robot dog trend continues, and the tie in with the Paw Patrol TV show is likely to make this a must-have. You can get all of the main characters, but Marshall is likely to be particularly popular.

Hamleys put it on its list of top gifts this Christmas, and John Lewis is selling it for £69.99.

The film is still doing well in the Box Office top 10, and the tie-ins remain incredibly popular. This doll wears a bracelet, and you have a matching one, which you can use to interact with her. You can also press her tummy and hear 25 phrases - plus of course there's plenty of opportunity for obligatory hair styling.

Toys R Us and Hamleys both tipped this interactive doll as a must-have for Christmas, so lots of retailers have run out of stock. Argos may have one in a store near you, and is selling them for £49.99.

This Chad Valley doll is £39.99 and is notable for how similar to a newborn the manufacturers have made it. It's meant to be the same height and weight, so children can play with their own child.

It’s exclusive to Argos - which is one of the reasons it's on the store’s list of the hottest gifts of the year - the other one being that small children are often obsessed with having a baby of their own.

The game made famous by so many You Tubers has been super-sized for Christmas. The general joy of the game remains the same: with identical jelly beans either being delicious flavours or completely grim ones. This version just makes it into more of an organised family game than a bean-eating free-for-all.

It was one gift that Hamleys tipped for this Christmas, so it has sold out all over the place. You can, however, still get it through Amazon for £28.49.