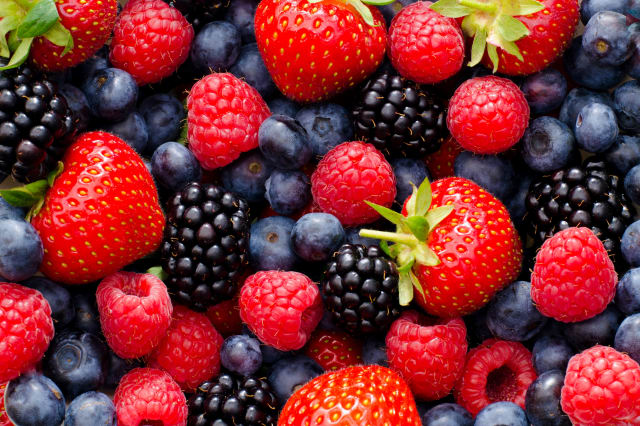 While there is no real evidence to show that food combining diets improve digestion or enhance weight loss, there are some foods that are best enjoyed together to get the best from their nutrients.

Mix up your berries
Berries are bursting with cancer-fighting antioxidants - but if you really want to benefit, try mixing up the berries in your bowl. Research published in the Journal of Nutrition found that eating a variety of berries at the same time significantly increases their antioxidant activity.

Enjoy strawberries and a handful of blueberries for example, or buy frozen mixed berries to use in smoothies. Just don't use yoghurt - milk proteins bind to antioxidants and so can prevent them from being processed as efficiently.

Apples with raspberries
Apples contain quercetin, an antioxidant which is known to kill off cancerous cells. Eaten with ellagic acid (an antioxidant found in raspberries, pomegranates, walnuts and cranberries), and it's even more powerful.

Broccoli with mustard
Broccoli contains the cancer-fighting compound sulforaphane. However, you need to eat the vegetable raw or lightly steamed for three to four minutes to benefit. Steaming it for five minutes or boiling it will destroy the enzyme. To get even more nutritional benefit, dip your broccoli in some mustard. The myrosinase it contains will help you absorb more sulforaphane, according to researchers.

Fish with wine
Enjoy a glass of white or red wine with your salmon and it will help you soak up the healthy omega-3 fats from the fish. According to researchers in Italy, the polyphenol antioxidants in wine might be responsible for improved omega-3 absorption. Just stick to one or two glasses per day, as drinking too much alcohol increases the risk of breast cancer.

Fish with turmeric
You know that oily fish and turmeric have health benefits – particularly when it comes to keeping your brain healthy and preventing cancer, and eating the two together can have an even more potent effect.

Researchers found that eating curcumin (the active ingredient in turmeric) and omega-3 fats together can help prevent cancer cells from multiplying and slow tumour growth.

Try coating salmon or trout with turmeric before you grill it. Also, eating turmeric with some form of fat can help the body to absorb it. For example, fry some vegetables or meat with oil and turmeric.

Piperine (found in black pepper) enhances the absorption of curcumin by around 2,000 per cent. Some people swallow a few whole peppercorns along with a curcumin supplement.

Tomatoes with olive oil
Tomatoes are incredibly healthy and known to help prevent some kinds of cancer. For the body to absorb lycopene – the key anti-carcinogenic ingredient in tomatoes – it's best to consume them with some form of fat, such as olive oil or avocado.

Beans and tomatoes
The body finds it harder to absorb non-meat sources of iron (such as that found in beans, edamame, leafy greens and fortified cereals). You can help by consuming it with vitamin C – found in oranges, tomatoes and berries. So for example, eat some tomatoes with leafy spinach or kidney beans.

Carrots and olive oil
Red, orange and dark green vegetables, such as carrots, tomatoes, red peppers and broccoli, contain carotenoids which reduce the risk of certain cancers and heart disease. However, you need to consume these vegetables with fat in order to benefit.

One study looked at the absorption of carotenoids with fat-free, reduced-fat and full-fat dressing. Researchers found that salad had to be eaten with a fat-containing dressing in order for any carotenoids to be absorbed. So try adding some olive oil or cheese to your salad, or enjoy broccoli and spinach with some butter.