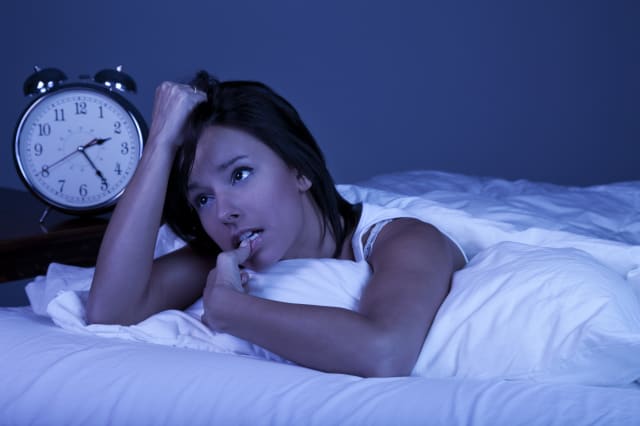 Most people need eight hours of good-quality sleep a night to function properly – but some of us naturally need more or less. Even one bad night's sleep can have a negative impact on your physical and mental performance the next day, while prolonged sleep deprivation has been linked to a variety of diseases, from diabetes to heart disease. Here are six ways that lack of sleep affects you...

See also: These foods will help you fall asleep

1. You feel more anxious
After a poor night's sleep, your cortisol (the hormone associated with stress) levels increase, along with your heart rate. As a result you can feel anxious and jittery the next day.

If you tend to suffer from anxiety anyway, you may be left feeling wired, rather than tired, after a bad night. This of course can lead to a vicious cycle if you find it hard to wind down at night.

2. You get irritable and angry for no reason
Your brain, more than any other organ, is most likely to be affected by sleep deprivation. It's not just that you'll have trouble concentrating, studies show that people who don't get enough shut-eye are likely to experience negative moods and get frustred and angry.

Experts believe this is caused by increased activity in the amygdala, the area of the brain that processes emotions. In 2007, researchers took brain scans of people suffering from sleep deprivation. They found that lack of sleep disrupts the connection between the amygdala and the medial prefrontal cortex (the part of the brain which regulates emotional response). As a consequence, study participants reactions to negative stimuli were exaggerated, leaving them feeling more angry.

3. You look rough
If you don't get enough 'beauty sleep' it shows on your face. Experts say that lack of sleep can cause the body to go into a fight or flight mode, in which it draws oxygen to vital organs, rather than the skin. This results in darker, deoxygenated blood, which is particularly visible in the thinner skin under the eyes.

But it's not just the bags under your eyes you have to worry about. When you don't get enough sleep, the growth hormones that stimulates cell and tissue repair don't get chance to do their job properly. Without proper collagen formation, your skin is likely to appear sallow and be more prone to wrinkles and other signs of ageing.

4. You crave energy-dense foods
Experts have known of a link between chronic insomnia and obesity for some time. A 2012 study found that lack of sleep can cause levels of the appetite hormone ghrelin to rise, causing volunteers to feel much hungrier than usual. Researchers say that the less shut-eye you have, the bigger your appetite will be the next day. Not only that, sleep-deprived people have reduced levels of leptin, the chemical that makes you feel full.

Researchers found that people who are sleep deprived are more likely to crave energy-dense foods, such as simple carbs and sweet foods.

5. Your cognitive functioning slows down
After a bad night's sleep, don't expect to score well on the crossword! Lack of sleep has been shown to have a negative effect on mental functioning, including concentration. Research shows that just a few missed hours sleep can result in reduced accuracy and vigilance, while long-term insomnia can affect long-term memory and reasoning skills.

6. Long-term insomnia affects your health
While one or two night's bad sleep is unlikely to do any lasting damage, long term sleep deprivation can have a negative effect on many of the body's systems.

Chronic insomnia is associated with increased risk of everything from diabetes to heart disease and cancer. Research shows that people who frequently sleep less than five hours a night have an increased risk of having or developing diabetes.

Long-standing sleep deprivation can disrupt your immune system, making you more prone to colds and flu. It also causes your blood pressure and heart rate to rise and increases levels of certain chemicals linked with inflammation, which may put extra strain on your heart.
Tags
Read Full Story