Tips to beat the burglars 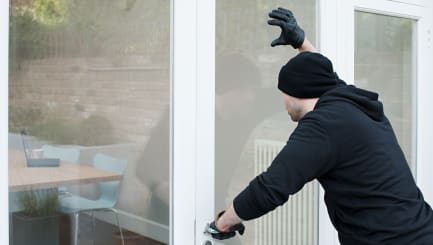 Many of us will be traveling to visit relatives over the festive season, but unfortunately criminals don't take holidays. Once upon a time all you had to do was cancel the milk and newspapers and ask a neighbour to keep an eye on things, but these days there are other ways to stay ahead of burglars.

Keep up appearances
There are timer plugs which can be programmed to make the lights or television switch on and off at pre-set moments – creating the impression that somebody is in the house. Alternatively, this FakeTV Visual Burglar and Intruder Deterrentcosts £15.99 and produces exactly the same sort of light a real television makes, simulating scene changes, light fades, light flickering, on-screen motion and colour changes, to make it seem like someone is at home.

Ask a neighbour to make sure no mail gets left poking out of your letterbox – and why not take things to the next level by inviting them to park on your drive while you're away as well?

Don't underestimate burglars
You might think you're being smart, but remember that many burglars are seasoned professionals and will know exactly the types of spots favoured for hiding door keys. They're also adept at squeezing through small windows and at "fishing" for keys through a cat flap or letterbox. Stand outside your home and imagine you have been locked out and need to get in. If you can think of a way, so can a burglar.

Keep schtum on social
It's nice to let friends know what we're up to and we all get excited about our upcoming holiday plans, but try not to over-share in that regard on social media sites. Burglars are known to comb social media sites for comments about holidays which indicate a property will be empty. You might even want to refrain from "checking in" at the airport or posting holiday snaps while you're still away.

Don't give them any leads
More and more of us are putting Christmas lights on the front of our homes in recent years – and a lot of people think nobody will notice if they run an extension lead out of a window to power them. Burglars are fully aware of this however – and will gladly take advantage of a slightly open window to force their way in. If external power outlets are not an option, look into solar or battery-powered lights instead.

Get an alarm fitted - and use it
A surprising number of people have a burglar alarm but don't actually use it due to the hassle or because they own pets and have got out of the habit. If you're going away and your pets are being looked after elsewhere, dig out that code and get the alarm set. Burglars are known to look for an easy target. If you can't afford the real thing, you could always buy a dummy alarm box to make them think twice about targeting your property.

Don't leave valuables on display
We've all got used to removing expensive items from view when we leave our vehicles parked up, and you should think the same way about your home. Don't leave expensive tablets, laptops and gadgets in clear view from the window. Burglars love high value items like these which are easy to wipe and sell on.

Catch them on camera
There's only one thing that deters a burglar quicker than an alarm, and that's the sight of a CCTV camera trained on them. Crime prevention experts say criminals are aware they could be generating evidence that will later appear in court – and will generally move on rather than risk it.

If you can't afford real CCTV, this BG Outdoor Indoor Fake Dummy Imitation CCTV Security Camera costs just £5.49. Made from an actual surveillance camera that has been modified into a dummy, the fake security camera features an authentic video cable and a fully adjustable mounting bracket. The camera requires 2 AA batteries (not included) to power the red light.
Tags
Read Full Story Click here to comment