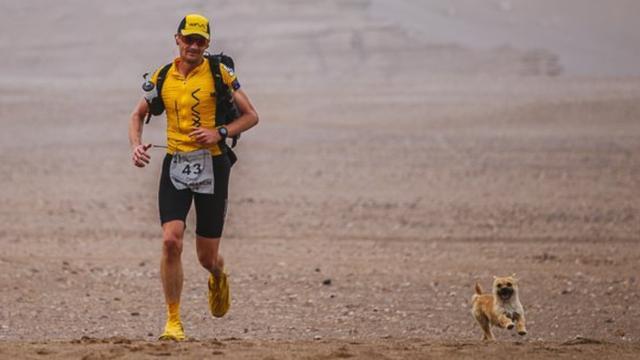 We've all had holiday romances, but one endurance runner found a longer-lasting love on a trip to China.

SEE ALSO: Should you let a dog lick your face

Dion Leonard was competing in a gruelling 155-mile marathon across the Gobi Desert in China when he was joined by an unexpected companion - a small stray dog.

And to his surprise, the pup joined him for the remaining 77 miles of his epic run.

Now the 41-year-old is bringing his non-pedigree chum to live with him in Edinburgh, following a hugely successful crowdfunding campaign.

After it went viral on social media, his "Bring Gobi Home" campaign raised more than double its £5,000 target.

He told The Independent how they formed an unbreakable bond: "At the start of day two, Gobi was on the start line next to me looking up at me.

"This was the first contact I had with her and as I ran off the line I noticed her by my side.

"I didn't speak much to her that day thinking she wouldn't stay with me, but at the finish line she followed me into the tent and we slept next to each other. That was it then."

He is hoping to have Gobi back in Scotland by Christmas, and is not worried about how she'll deal with the country's climate.

"She joined us on the cold side of the mountain - so I'm sure she will adapt quickly to life in Scotland."