Could it be skin cancer? How to tell if a mole is cancerous

A change in the appearance of a mole could be a sign of skin cancer – but would you know what to look for? We reveal the five most common melanoma warning signs in pictures.

What is melanoma?
Skin cancer is one of the most common cancers in the UK and cases of melanoma (an aggressive type of skin cancer that can spread to other parts of the body), is on the rise.

There are currently around 13,000 new melanoma cases diagnosed each year in the UK – but caught early, it's also one of the most treatable forms of cancer.

According to Boots Pharmacist Tom Kallis. it's best to go the GP with a suspicious mole when:

- It is larger than the width of a pencil
- It has recently changed shape, size or is growing
- The colour of it has changed
- It has become painful, itchy or is bleeding
- The border of the mole is changing and becoming irregular

Check your moles
It's a good idea to check your moles every few months so you're aware of any changes that may happen. Pay attention to moles that are different to others on your body. The most common place for a melanoma to develop is on the lower leg for women and on the back for men. A good rule to follow is ABCDE: 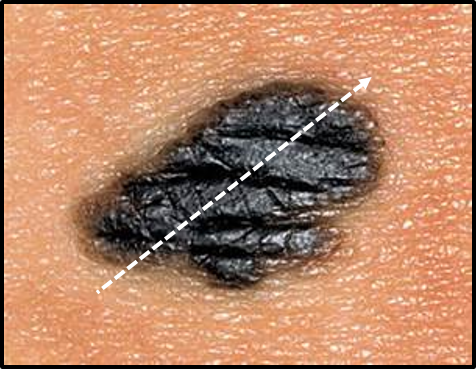 A is for Asymmetry
A normal, healthy mole will be round and symmetrical – so that if you draw a line through the middle of it, the two halves are approximate mirror images.

If the mole is asymmetrical, like the one shown here, it can indicate that is has grown at an uneven rate, which could be a sign of abnormality. 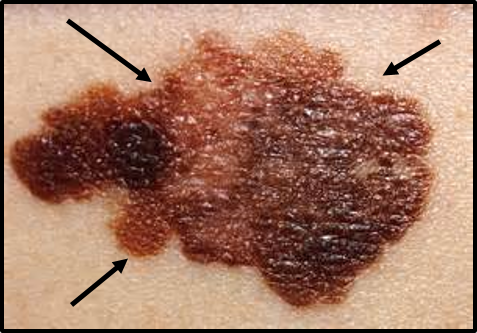 B is for Borders
Healthy moles tend to have round and smooth edges with well defined borders.

A border of a mole that appears unclear, irregular or has ragged boundaries against normal skin, could be an indicator of melanoma. 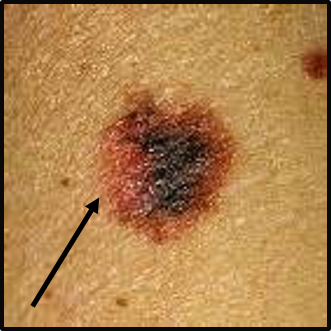 C is for Colour
Normal moles usually have one uniform colour throughout. If you notice a change in colour, especially black, blue or uneven colours, it's important to get checked out. Melanomas will often contain several colours or are uneven in colour. Studies show that moles with three or more varying shades of black or brown are particularly likely to be cancerous. 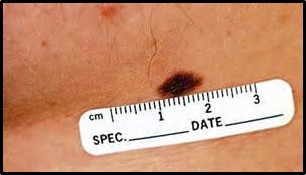 D is for Diameter
A mole that is growing larger or is more than 5-6mm in diameter may be a cause for concern. A large mole may be perfectly healthy, and a mole much smaller than this may become cancerous. What's more important is stability, i.e., whether you notice a mole is growing in size or changing shape. Most cancerous moles grow horizontally before they spread vertically. 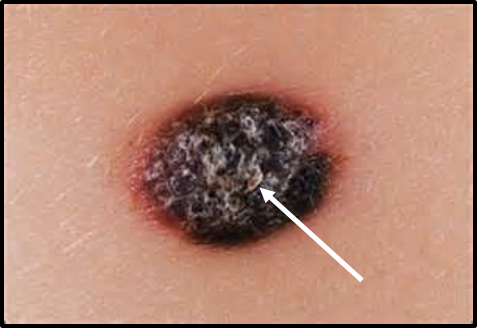 E is for Evolving
If a mole is evolving - changing in shape, size, colour, itching or bleeding of existing moles or if a new mole/spot appears - get it checked out.

Other risk factors
Everyone should regularly check for moles, paying particular attention to any that have changed in appearance, but it's especially important if you are at higher risk, i.e. you:

- Are white, have red or blonde hair and burn easily.
- Have a close family member who has been diagnosed with melanoma.
- Have had skin cancer in the past.
- Regularly use sunbeds or used a sunbed 10 times or more a year before the age of 30.
- Have been an ardent sun-worshipper in the past.
- Have ever been badly sun burnt, enough to cause blistering.
- Have more than 100 moles on your body.
- Have a suppressed immune system.

Where to check
Melanomas can appear anywhere on the body, but they are more common on the back, legs, arms and face. According to Cancer Research UK, women are mostly affected on the legs – 42% of cancerous moles appear here, followed by the arm (21%), the trunk (17%) and the face (14%), with the rest (6%) unspecified.

Boots' mole scanning service
Worried about a mole? See your GP or pop along to Boots' Mole Scanning service. A member of your Boots Pharmacy team will talk with you in a private consultation room. Once you've filled out a short questionnaire and consent form, a scan of the mole(s) will be taken using a SIAscope - and the image will then be sent a ScreenCancer UK Dermatology Specialist. You should receive a report within two weeks. Find out more about the service and participating stores here.

Protection in the sun
The best way to help prevent skin cancer is to be sun smart. Take to the shade between 11am and 3pm when the sun is usually at its most intense, and wear a good factor sun cream, such as Garnier Ambre Solaire Protection Lotion SPF30 £6.50 for 200ml.

Children, and those who are fair-skinned and burn easily should consider using a higher factor, such as Ladival Sun Protection Lotion SPF50+ (£10.00 200ml).

Not sure what factor is right for your skin type? Boots has a handy tool to find the best protection for you and your family.