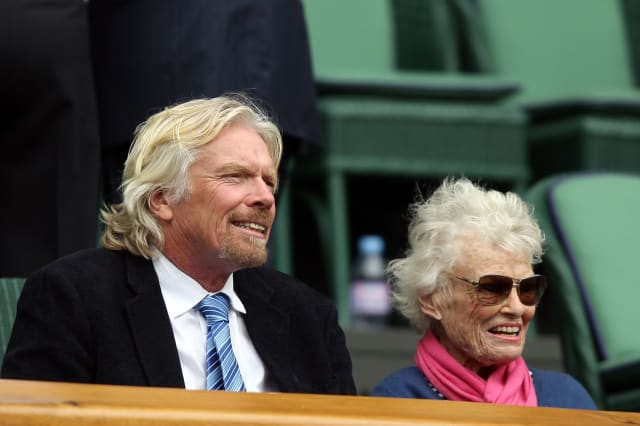 Sir Richard Branson has announced his mother Eve has died after battling coronavirus.

The entrepreneur said he wanted to "celebrate her wonderful life, her tremendous spirit, the joy she brought to so many, and the love she gave us all".

Sir Richard said Eve, 96, who was an author and philanthropist, died as a result of fighting off the illness.

The founder of the Virgin Group, who is the eldest of her three children and her only son, wrote on Twitter: "I'm sorry to share that, sadly like a lot of people's mums and dads right now in these days of Covid, my mum Eve has also passed away.

"Rather than mourn her loss, I wanted to celebrate her wonderful life & the joy she brought to so many."

Writing on his blog he said: "I'm sorry to share that, sadly like a lot of people's relatives and friends right now, my mum Eve has also passed away from Covid.

"She held on for one last victory, managing to fight off the virus, but had expended all of her energy in the process.

"One of my wonderful sisters, Vanessa, and nephew Louis were with her until the end, as were the wonderful nurses who she entertained with tales from her life and much laughter over glasses of whisky.

"Rather than mourn her loss, I want to celebrate her wonderful life, her tremendous spirit, the joy she brought to so many, and the love she gave us all.

"Mum was 96 years old, but had the same enthusiasm and energy she had when I was a boy.

"As for so many of us in these days of Covid, it feels so strange that the person who has always been there for us, with such zest for life, is gone.

"My sisters Lindy and Vanessa and I were so lucky to grow up with mum and dad as our parents, instilling values that have lasted a lifetime.

"They taught us the importance of hard work, of not taking yourself too seriously, of treating people how you wish to be treated, of entrepreneurship, and so much more.

"They showed us how family is the most important thing in the world, and surrounded us with love and encouragement."

Richard Branson
Richard Branson, organiser of the Students' Advisory Service, on the telephone at his London office.
Virgin tycoon Richard Branson with his daughter Holly plants a kiss on the head of his new born baby son Sam in Portland Hospital London
Virgin Atlantic Airways Chairman Richard Branson enjoys a shower with models Vanessa (l) and Charlie (r) in Virgin's new Revivals lounge at Heathrow Airport, London. The lounge contains facilities for travellers to refresh themselves after their journey.
Richard Branson and Emma Bunton during the GQ Men of the Year Awards at the Natural History Museum in London.
Chief Executive of BA Rod Eddington on right and Virgin's Chairman Sir Richard Branson pull together to sponsor the London bid for the 2012 London Olympics, at Wraysbury, near Heathrow Airport.
Virgin boss Richard Branson sports dreadlocks as he walks across the wing of the first Virgin plane to travel to Montego Bay in Jamaica from Gatwick. Watch for PA story TRAVEL Jamaica
Labour leader Tony Blair en route for a day of campaigning in Manchester today (Saturday), is joined in the cab of the Virgin West Coast line train, by Virgin boss Richard Branson (right).
Sir Richard Branson, Alexandra Burke and David Hasselhoff at the Virgin Active London Triathlon at the Excel Conference Centre, London.
Sir Richard Branson rides a camel in the Dubai desert on Wednesday March 29, 2006. The entrepreneur is in the gulf state to promote Virgin Atlantic Airways' first service to the Middle East - the inaugural Heathrow to Dubai flight landed yesterday. PRESS ASSOCIATION photo. Photo credit should read: Tim Ockenden/PA.
Sir Richard Branson talks with Chancellor of the Exchequer and Prime Minister elect Gordon Brown at Euston station, central London, during the launch of the UK's first biodiesel train.
Prince Harry (left) and Sir Richard Branson (right) pose with the Elite Men's and Women's winners, Kenya's Priscah Jeptoo (2nd left) and Ethiopia's Tsegaye Kebede (2nd right) during the trophy ceremony at the Virgin London Marathon in London.
Sir Richard Branson (centre) is joined by Ewan McGregor (left) and Charlie Boorman (right) as he delivered the first batch of motorcycles to Nairobi bought by Virgin Atlantic for African Charity Project 'Money' which enables healthcare workers to reach remote villages in Kenya.
Virgin chairman Sir Richard Branson, dressed in a lion costume, at Potters Fields in London for the launch of Virgin Money's not-for-profit online fund-raising service Virgin Money Giving and the nationwide competition, Run with Richard to find a running partner to run with him in the 2010 Virgin London Marathon.
Sir Richard Branson charms local residents out of their baskets.
Up Next

Sir Richard described his mother as "a force of nature", who "lived many remarkable lives", adding that she took glider lessons disguised as a boy, enlisted in the Wrens during the Second World War, toured Germany as a ballet dancer after the war, acted on the West End stage and worked as an air hostess on the British South American Airways routes.

She made headlines in 2011 after it was reported she was saved from a fire on Sir Richard's private Caribbean island Necker by actress Kate Winslet.

However she later denied this is what happened, telling The Guardian: "It was the hurricane of hurricanes and we were on fire and we would have all been burnt alive if it wasn't for my grandsons.

"It was four or five in the morning and they went around getting everyone out of bed.

"I remember saying: 'I'd better put my mac on' because I wanted to cover up and Jack (her grandson) saying: 'No, not right now.'

"Anyway, I'd just about got outside and the rain was pouring down and I didn't have my contact lenses in, but I was making my way out and Kate and her two children were behind me.

"Then she just sort of picked me up and took me down four steps and that was it.