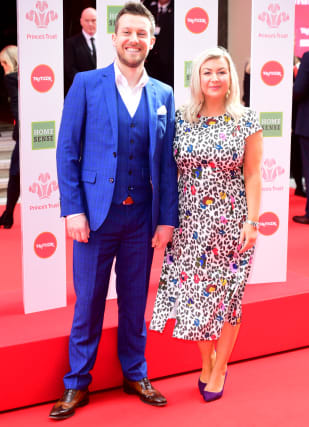 Author Rosie, who hosts the podcast Sh**ged. Married. Annoyed with her TV star husband, shared a photo of the newborn on Instagram, in which he can be seen in a white babygro with a head of blond hair.

The couple, who married in 2014, are already parents to son Robin, four.

Rosie wrote: “Hi everyone. This is Rafe Ramsey.

“He’s yet to meet Robin, so once we’re all settled back at home I’ll introduce him to you properly. Hope you’re all ok xx.”

She documented her pregnancy on social media and spoke openly about her struggles to prepare for a birth during the pandemic.

Earlier this week she wrote on Instagram: “This is not how I wanted my baby to enter the world.

“I know I’m not alone, thousands of women (including some of my good friends) gave birth during lockdown restrictions last year. You lot are giving me so much strength right now I swear!”

She has also discussed her anxiety after her last pregnancy ended in a miscarriage.

The couple announced they were expecting a second child in July,

Sh**ged. Married. Annoyed sees Rosie and Chris, who starred in Strictly Come Dancing in 2019, discuss intimate details of their lives and chat to celebrity guests.