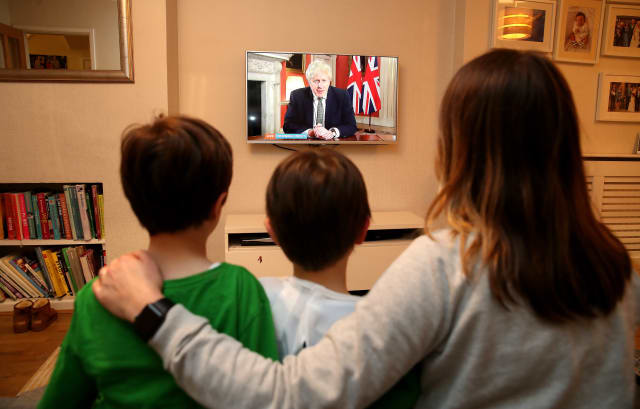 The Prime Minister’s televised statement on new coronavirus restrictions was watched by an average audience of 15.6 million viewers on the BBC.

A spokeswoman for the broadcaster confirmed an average of 14.1 million people watched on BBC One on Monday evening, while an additional 1.5 million tuned in on the BBC News channel.

His statement was also broadcast on ITV, Channel 4 and Sky.

The BBC overnight viewing figures are slightly down on those for Boris Johnson’s first lockdown announcement in March last year, when 15.4 million watched his address on BBC One and a further 2.5 million viewed the statement on the BBC News channel.

In his statement on Monday evening, which was broadcast at 8pm, Mr Johnson announced stringent new lockdown measures for England.

He said schools must close to help stop the spread of Covid-19 and to prevent the NHS from being overwhelmed by surging infections.

Mr Johnson warned that the coming weeks will be the “hardest yet” but said that “with a fair wind in our sails” it should be possible to vaccinate 13 million of the most vulnerable people by mid-February, paving the way for controls to be eased.

Overnight viewing figures for his statement are more than twice as high as those for the Queen’s Christmas Day message (6.3 million).

Viewing figures have also been requested from ITV, Channel 4 and Sky.

Priyanka Chopra Jonas committed to a year in London