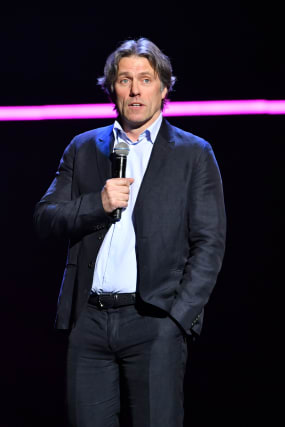 A new star is joining the cast of Doctor Who – comic John Bishop.

The 54-year-old actor and funnyman, who recently tested positive for coronavirus, said boarding the Tardis was a "dream come true".

He will appear in the new series of the BBC One show, in which Jodie Whittaker reprises her role as the Time Lord, later this year.

Bishop has already begun filming his role, but TV bosses have kept his signing under wraps until now.

He plays a character called Dan, who "becomes embroiled in the Doctor's adventures".

"Travelling through space and time alongside the Doctor and Yaz, he'll face evil alien races beyond his wildest nightmares," the BBC said.

Bishop will star alongside Whittaker and Mandip Gill, who returns as Yaz.

He said: "If I could tell my younger self that one day I would be asked to step on board the Tardis, I would never have believed it.

"It's an absolute dream come true to be joining Doctor Who and I couldn't wish for better company than Jodie and Mandip."

Bishop is joining Doctor Who in its 13th series, which began filming in November last year.

Bradley Walsh and Tosin Cole, who have now left the show, made their last appearances in the New Year's Day special episode.

Programme boss Chris Chibnall said: "It's time for the next chapter of Doctor Who, and it starts with a man called Dan. Oh, we've had to keep this one secret for a long, long time.

"Our conversations started with John even before the pandemic hit.

"The character of Dan was built for him, and it's a joy to have him aboard the Tardis."

Matt Strevens, BBC Studios executive producer, said: "It's been a total joy having John join the cast and we've been having a lot fun on set already.

"We can't wait for you to meet Dan when the show returns later this year."

The news comes after Bishop said he has been "overwhelmed" by support since revealing he tested positive for Covid-19 on Christmas Day.

Both he and his wife Melanie contracted the virus over the festive period and had been "flattened" by the illness.

He told fans the couple are "getting a little stronger" every day and promised he will be back to work in January.

The Doctor Who New Year special, Revolution Of The Daleks, aired on New Year's Day.

BBC drama controller Piers Wenger said: "We are beyond thrilled to have John Bishop joining Doctor Who.

"Alongside Jodie Whittaker and Mandip Gill, John is a wonderful addition to the show and we have no doubt that series 13 is going to be another thrilling set of adventures for the Doctor."