Which celebrities have had the coronavirus vaccine? 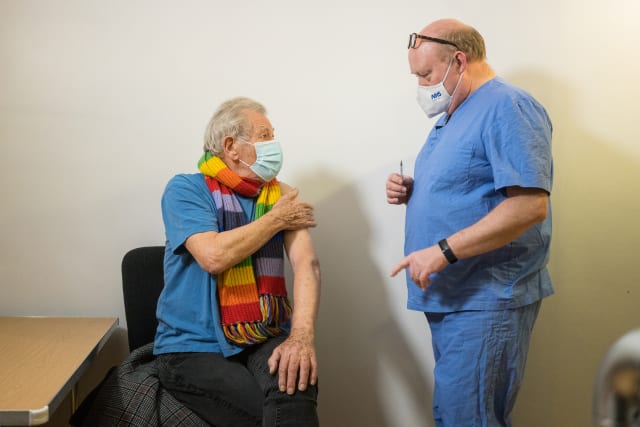 The rollout of the Pfizer/BioNTech vaccine is under way with healthcare workers, people living in care homes and the elderly being prioritised.

Those receiving the vaccine will be given a booster jab 21 days after their first dose to ensure the best chance of being protected against the virus.

Celebrities from the worlds of music, film and TV have been sharing their experiences of having the jab in a bid to encourage others.

Here are some of the first to receive their vaccinations.

The veteran actor, 81, was vaccinated at Queen Mary’s University Hospital in London, saying after that he felt “euphoric”.

The Lord Of The Rings star said all elderly people should ensure they get the jab, adding it was “painless”.

The Great British Bake Off judge, 80, shared an image of herself wearing a mask while a medic administered the vaccine.

“Who wouldn’t want immunity from #Covid19 with a painless jab??” she tweeted.

The Glastonbury festival founder, 85, got his vaccination at a GP-led community vaccination site in Shepton Mallet on New Year’s Eve.

Eavis said his festival, which was cancelled in 2020 due to Covid-19, might return in 2021 if enough of the population was vaccinated.

The dancer and presenter, 92, received the first of his two injections at an NHS vaccine centre in the grounds of the horse racing course at Epsom, Surrey.

He said it meant a “great deal” to have been given the jab and dubbed those who turn it down “crazy”.

“I couldn’t believe it when they called me and said, ‘It’s next week and then the next one is in January’, and here I am,” he said.

The 80-year-old father and sometime co-star of comedian Jack Whitehall also shared a snap on Twitter of himself in hospital getting the first part of the vaccine.

He wrote: “Here was I worrying about a little prick, no, not @jackwhitehall, which was brilliantly organised by @GSTTnhs.

“Thank you to all the kind and wonderful NHS staff who administered my COVID-19 vaccine last night. See you for little prick No 2 in January.”

The 81-year-old rock and roll star, famed for a string of hits in the 50s and 60s, was given the jab at Lister Hospital in Stevenage.

He said getting vaccinated was “common sense”, adding: “The whole thing is just the right thing to do. You need an injection.”

London-born Wilde, whose real name is Reginald Smith, was also treated at Lister Hospital during the first national lockdown after collapsing at his Hertfordshire home. He was treated for an irregular heartbeat.