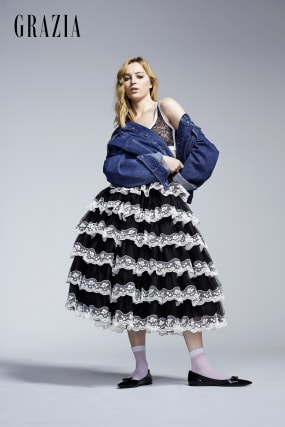 Bridgerton actress Phoebe Dynevor has praised the show’s use of an intimacy coordinator for her steamy scenes with co-star Rege-Jean Page.

Netflix’s raunchy period drama is set in Regency London and follows Dynevor’s character, Daphne Bridgerton, as she tries to find a husband.

Dynevor, 25, said she can no longer imagine filming sex scenes without the help of an intimacy coordinator.

She told Grazia magazine her first sex scene was in episode six, and “it was so great, because it felt safe and fun: you choreograph it like a stunt, or a dance.

“It’s crazy to me that that hasn’t been there in the past. I’ve done sex scenes before that I can’t believe I did: it was only five or six years ago, but it would not be allowed now.”

Daphne is the eldest daughter of the powerful Bridgerton family and is introduced as being “perfectly beautiful”.

Dynevor, whose mother Sally Dynevor plays Sally Webster on Coronation Street, said she had a “full-blown panic attack” while dealing with the pressure of a seven-month shoot.

“There is a scene in one episode where Daphne walks down the stairs and everyone is staring at her,” she said. “That was one of the hardest scenes to shoot. Everyone has days where they wake up and feel like poo and don’t want to see people, let alone be on camera.

“It just so happened I was having one of those days then, and felt so out of my comfort zone. Basically, I had a full-blown panic attack.”

Read the full interview in Grazia magazine, on sale now.