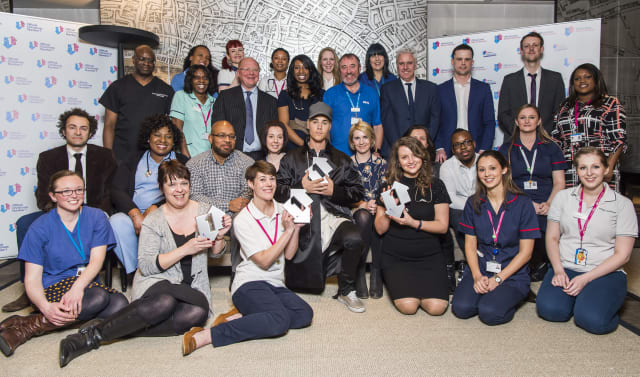 A member of the chart-topping NHS choir chosen to appear in the Queen’s Christmas broadcast has said the experience was “amazing”.

Lewisham and Greenwich NHS Choir performed the carol Joy To The World from Windsor Castle at the close of the Queen’s annual address – a heartfelt message of hope to the country.

Andre Levy, who sings bass parts with the choir, said: “Only now am I digesting the experience, it was too much to take in on the day.

“It’s like a child being given all the nicest things in the world in one go, without being able to sift through and appreciate it. It was an amazing experience.”

The choir’s single A Bridge Over You was Christmas number one in 2015 after a neck and neck race with Justin Bieber’s hit Love Yourself.

When Bieber learned more about the rival choir, he urged fans to download their track and he later became friends with the group when they met.

The global star and Chance the Rapper teamed up with the NHS workers to re-record their hit single Holy, released last week in aid of NHS Charities Together and the Lewisham and Greenwich NHS Trust Charity.

The choir were kept in the dark about their big commission to appear in the Christmas broadcast, and were only told to learn the carol and meet up at their regular rehearsal space at University Hospital Lewisham, in south-east London, when all would be revealed.

Mr Levy, who works as a medical records clerk for Lewisham and Greenwich NHS Trust, joined the choir just after its number one success.

“We were absolutely oblivious, everything was kept out of sight. Some of us were speculating among ourselves that it might be a high-profile celebrity, we even thought possibly royalty”, said Mr Levy.

He said the group could not believe the news when told in mid-December: “Everyone was shocked, there was a little bit of silence but overall there was a euphoric feeling.

“Everyone was extremely excited, including myself, and felt very privileged to be a part of something like that.”

After being told, the choir travelled separately to Windsor, due to coronavirus, and recorded the carol in the castle’s St George’s Hall.

Mr Levy said the event was a positive way to end a difficult year: “This is like the light at the end of the tunnel.

“With everything that people have gone through – it’s been one of the toughest years in history – it’s wonderful to end on a high.”