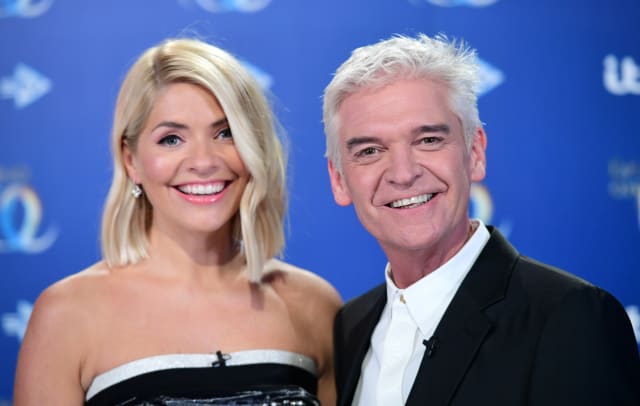 The presenters indulged in mulled wine and enlisted the help of their celebrity friends to end a rocky year on a high note, while Rochelle Humes’s new-born son also made an appearance.

There were emotional scenes as Evie, an eight-year-old who was diagnosed with a rare blood disorder, had her home transformed into a snowy grotto before getting the chance to meet her favourite singer, Olly Murs.

Schofield said: “After months of gruelling treatment and countless hospital stays we thought Evie deserved a special treat this Christmas.”

And 10-year-old Maizie, who became a carer for her younger brother when her mother was diagnosed with breast cancer, was also given a special surprise.

During a trip to Lapland UK, Maizie, a huge dance fan, was invited to perform with Anton Du Beke on his show next year.

Back in the studio for the first Christmas special in This Morning’s 32-year history, Willoughby and Schofield became emotional while looking back on the year and opening gifts.

Guests on the show included Davina McCall talking about The Masked Singer returning on Boxing Day and Dick and Angel Strawbridge discussing their Christmas show Escape To The Chateaux At Christmas.

In the kitchen, Gino D’Acampo was on hand with Negroni cocktails before serving Willoughby and Schofield with a Christmas starter of smoked salmon with avocado tartare.

And Humes, a regular This Morning guest host, gave viewers a glimpse of her and husband Marvin’s son Blake, who was born in October.

She said: “He’s doing so well and is well behaved. He gets far more engagement on social media than I do!

Asked by Willoughby how Blake’s two sisters had been with the new arrival, Willoughby said: “They are brilliant. They are constantly all over him and fighting about who’s going to hold him and who’s passing me the baby wipes… but it’s really nice, and I think because he’s a boy, there’s no competition, they are just trying to be mini mummies!”