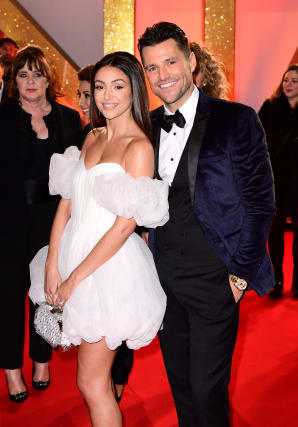 Michelle Keegan has said she does not expect her Christmas with husband Mark Wright to be “really rock and roll”.

Appearing on The Jonathan Ross Show, Keegan said she wanted to claim their festive celebrations will be exciting but that in reality she will be receiving a new pair of pyjamas.

Speaking about their plans, she said: “At home I like cooking, I enjoy cooking. He’s not in the kitchen when I’m cooking. He’s getting there. He’s not that bad now. But I am definitely the cook of the household. I enjoy it.

Keegan bowed out of her starring role as Army officer Georgie Lane in the BBC One military show Our Girl earlier this year, after appearing in four series.

However, she said the door for a return remains open.

She said: “I will never say never with Our Girl. I absolutely loved that job. It was a fantastic role for me, it was really challenging.

“Not only was it physically challenging, but I learnt so much on that job about the military and the medical side as well.

“I really enjoyed it, but I felt it was the right time for me to move on then.

“In future Georgie can come back, they have left the door open for Georgie.

“I was so lucky (to travel). It’s hard work and long days. Sometimes we’re working six-day weeks and it is very challenging.”

– The Jonathan Ross Christmas Show airs on Thursday December 24 at 10pm on ITV.