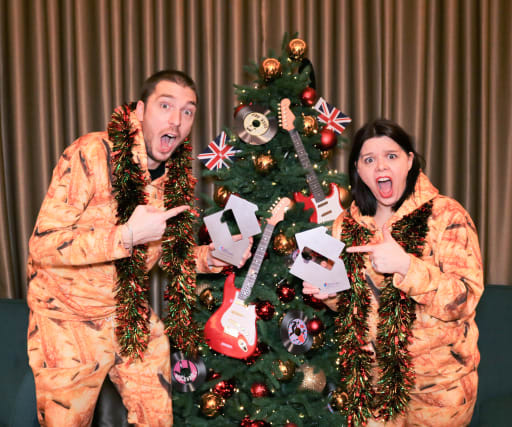 LadBaby has said he will celebrate with “sausage rolls and champagne” if he lands his third consecutive Christmas number one.

He told the PA news agency there is “a lot of competition this year” and he is up against “megastars” as he competes for the accolade with his song Don’t Stop Me Eatin’.

LadBaby and his wife Roxanne Hoyle landed Christmas number ones with 2018’s We Built This City… On Sausage Rolls and last year’s I Love Sausage Rolls.

“Our songs aren’t the best in the sense of we know they are not going to win Grammys and they are not designed to do that,” LadBaby said.

“They are designed to release at Christmas, make everybody smile, put everyone in a feel-good mood and bring everyone together.

“We want people singing and dancing in their living room with their family, having a bit of fun and raising money for this incredible cause.”

Ed Sheeran also entered the race for Christmas number one on Monday when he released his new song Afterglow.

LadBaby said that after his last victory he did not plan to try to top the chart again this year.

However he said he decided to release Don’t Stop Me Eatin’ after realising how much The Trussell Trust have “struggled” with an increased demand for their services amid the coronavirus pandemic.

“We thought, you know what, our songs are a little bit silly but they have the ability to make a lot of people smile, which is something I think we all need this year and they can help raise a lot of money and a lot of exposure for a great charity,” he said.

He added that he wants to “raise the profile of food banks”.

When asked how he will celebrate if he tops the chart for a third time, LadBaby said he would have “sausage rolls and champagne probably, if it happens”.

“We will be celebrating no matter where we finish because it has been an incredible opportunity and honour to try and go for it again,” he added.

LadBaby has also recorded a version of this year’s song with Ronan Keating, who he labelled a “legend”.

“It was great fun and fair play, he totally got it and I think we did a great job,” he added.

The official Christmas number one race 2020 kicked off on December 18, with sales and streams counting up until midnight on December 24.

The winner will be revealed on Christmas Day.