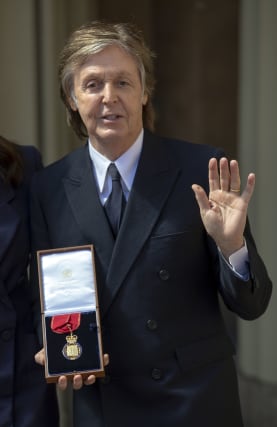 The ex-Beatle, 78, said he feels sorry for singers and songwriters trying to make a living today, as platforms like Spotify and Apple Music come under the spotlight over their remuneration to artists.

“What they’ll tell you is, ‘Yes, but if you have millions of that small percentage you’re all right’.

“But I do feel sorry for some of the young kids.”

He added: “Sometimes, it’s like the only hit they’re going to get and it’s a huge one, but they’ve just got to rely on the streaming companies to pay them.

“I think they probably don’t pay enough. But (the platforms are) in such a powerful position. What can people do?

“I suppose you just organise, petition them and try and put some pressure on them.”

Asked if he would like to see more money going to artists, he replied: “Yeah. The truth of it is that the artists are the ones who make the music. The Beatles sang and played all those records.

“An ordinary person would think, ‘so you get all of the money’. But it’s not the way.

“So, for younger people particularly, I would like to see them get more because they get very small shares, particularly on the streaming.”

The Musicians’ Union and Ivors Academy have called streaming royalties “woefully insufficient” and urged the Government to undertake a review.

Elbow frontman Guy Garvey told MPs, who are holding an inquiry into the impact of streaming giants, that the system threatens the future of music in the UK.

Chic frontman Nile Rodgers has said the finances of streaming are shrouded in secrecy.

“Artists and writers are not remunerated equally. They do not get their fair share of the pie.”

It was announced earlier this month that the Duke and Duchess of Sussex had signed a lucrative deal with Spotify to host and produce podcasts to highlight “different perspectives and voices”.

Harry and Meghan’s production company Archewell Audio has gone into partnership with the streaming service for an undisclosed sum, estimated to be worth around £18 million for their charitable body Archewell.

Sir Paul also said his crew, who usually tour with him, were paid this year despite concerts being axed.

“They depend on the live concerts,” he said.

“I’ve been paying crazy insurance fees for years… and finally it paid off… so it was a real silver lining. I was able to ring everybody up and say, ‘You’re all getting paid’.”

He told the Radio 4 programme he will not be following in Bob Dylan’s footsteps by selling his back catalogue, saying: “I’m very proud to have them. I feel like I’m looking after them. I’m not keen to sell them.”