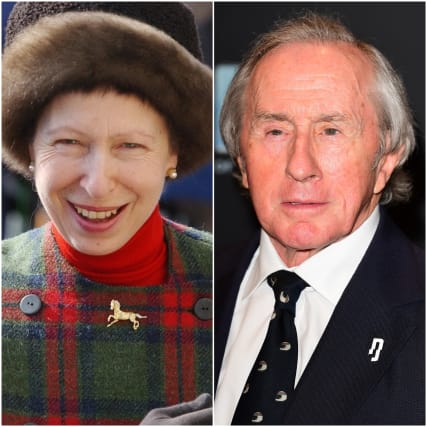 Sir Jackie Stewart has revealed he helped Steven Spielberg get access to a famous location for one of his Indiana Jones movies – during a charity shooting event.

Reminiscing with the Princess Royal to raise awareness about his Race Against Dementia charity, the triple Formula One world champion said he put the Hollywood director in touch with a VIP who could help.

Spielberg was desperate to get permission to shoot the finale of India Jones And The Last Crusade at the world famous site of Petra in Jordan – but had been denied permission.

The former racing driver told Anne, during their video call, the director and stars from the movie, Harrison Ford and Sir Sean Connery, took part in a charity clay pigeon shooting event he organised at Gleneagles in Scotland.

He said Spielberg appeared distracted as they chatted: “He starts looking over my shoulder and I’m thinking, ‘what have I done to deserve this’.

“And suddenly says ‘excuse me, but that looks like King Hussein of Jordan over there’ and I said ‘yes, that’s who it is’.

“We’ve been trying to get permission to go to Petra”, the director replied.

Sir Jackie told Anne: “I said ‘maybe you should speak to His Majesty’, so I got them together – bingo – he got his permission and he was a very happy chappie.”

Anne and Sir Jackie have been close friends for many years and the former racing driver’s wife Lady Helen is a godmother to Zara Tindall, the princess’ daughter.

It was Lady Helen’s diagnosis with dementia six years ago that led her husband to launch the charity to introduce the technologies, innovation and problem-solving ethos of Formula One into the medical laboratory, to progress research at speed into the condition.

It has already raised millions to fund a global network of research Fellows who are taking the advances from Mclaren F1, Red Bull Racing and Dyson into their work towards greater understanding of the disease and its causes, to develop more effective treatments and, ultimately its prevention.

Anne recorded a wide-ranging talk with Sir Jackie as part of his unique Memories series of conversations to support his charity, and in the coming months he will be featured with Prince Albert of Monaco, tennis legend Rod Laver, Pink Floyd drummer Nick Mason and opera singer Dame Kiri Te Kanawa.

In other moments, the princess spoke of her pride in the equestrian success of her daughter and with understatement said it was a “treat” to be able to present her with a silver medal as part of the GB Team at the London Olympics in 2012.

Anne also complimented the poise and grace of Sir Jackie’s wife, and spoke warmly about her influence on her daughter.

She said: “The great advantage of having Helen as a godmother was that she had such style.. and all her mannerisms she was so well contained and very professional.

“And let’s face it looking after you racing, she had a real application to the role, but her as a personality and her presentation, and her style and I rather hoped that some of that would rub off on Zara, and I hope you think it has, because I do.”

Speaking about his wife Sir Jackie said with a sigh: “For Helen, it’s a tough time as you’re aware, I mean she’s got dementia…”

Speaking after the video call, he added: “I have been fortunate to have a wonderful career and my wife Helen was by my side through it all.

“We should have been able to share those memories forever but dementia steals that away. Without urgent progress, one in three people born today, will go on to suffer dementia and that is unacceptable.

“I passionately believe that the way Formula One uses advanced technologies and innovative thinking to achieve remarkable developments at speed, can help scientists to create a real and much-needed breakthrough in dementia research.”