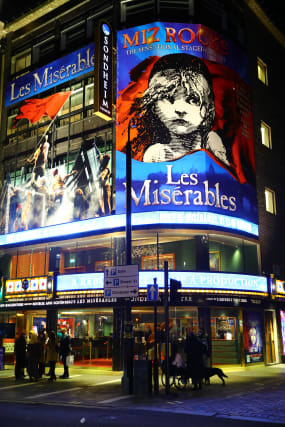 The curtain came down on the West End as London was placed under Tier 3 restrictions.

Entertainment venues in the capital have been forced to once again close their doors due to the tough new coronavirus laws, which came into force on Wednesday.

Theatres have lamented the move, with major industry figures including Andrew Lloyd Webber, producer Sir Cameron Mackintosh and playwright James Graham warning of the dire impact closures will have on an already ailing sector.

Large queues of customers gathered outside the London Palladium on Tuesday, where the pantomime Pantoland was performed for the final time before Tier 3 restrictions were implemented as a result of soaring case rates.

There were similar scenes at the Sondheim Theatre, where a production of Les Miserables returned to the stage for the first time in almost nine months at the start of December only to be forced to close again.

Actor Julian Clary, who had been starring in pantomime at the London Palladium, tweeted a picture of empty chairs at the venue with the safety curtain drawn across the stage.

He wrote in the caption: “Hard to say goodbye.”

“None of that negates how gutting it is that the theatre industry is being treated the way it’s being treated. People are complex. You can feel lots of things at once. One feeling or acknowledgement of a singular fact does not cancel out another.”

Before the performance at the London Palladium, a post on the venue’s official Twitter account read: “The curtain is about to rise on our untimely, final performance.”

Tier 2 restrictions in the affected regions allow for socially distanced performances to take place while galleries and museums can also welcome visitors.

However, arts venues in the capital now find themselves having to close again after the lockdown in England came to an end on December 2.

Sir Cameron criticised the Government’s decision to move London into Tier 3, describing it as “devastating”, adding it “smacks of panic”.

Lord Lloyd Webber, who owns the London Palladium, said the move seems “arbitrary and unfair” and questioned why theatre performances are being banned while shopping is allowed to continue.

A DCMS spokesperson pointed to the Government’s £1.57 billion Culture Recovery Fund and said Whitehall remains “completely committed” to supporting the arts industry during the pandemic.