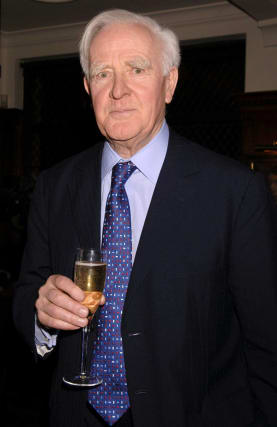 The revered author wrote best-selling novels including Tinker Tailor Soldier Spy, The Spy Who Came In From The Cold, and The Night Manager.

He died after suffering from pneumonia, a statement issued by his literary agent said.

Jonny Geller from The Curtis Brown Group shared a statement from the author’s family saying:  “We all grieve deeply his passing. Our thanks go to the wonderful NHS team at the Royal Cornwall Hospital in Truro for the care and compassion that he was shown throughout his stay. We know they share our sadness.”

Pugh starred in the BBC’s mini-series adaptation of le Carre’s novel The Little Drummer Girl which aired in 2018.

Sharing a photograph of herself with the author, Pugh wrote: “Not this beautiful man too. Just heard the news of the legend John le Carre’s passing and my chest is heavy.

“I was lucky enough to meet this man, drink with this man AND work with this man! I still pinch myself about our friendship to this day.

“The first time we met we were in our last few days of filming ‘Little Drummer Girl’ in Prague and I was finally meeting the person who it all came from. THE John le Carre! I was so nervous. Obviously.

“I remember sitting down next to him at dinner and after a while of back and forth, realising that we were both trying to figure each other out. Sizing one another up, testing and teasing each other constantly. Until, I called him an old fart. I watched his eyes light up with glee and we both cackled until we cried.

“He peered at me over his glass and giggled, “I think we’re going to get along just fine.”

“We knew a magical friendship had arrived”.

Pugh went on to recount being “enticed by a story teller telling his stories.. but I really was. Am. Will be forever”.

She ended her message writing: “David, I shall hear you in your writing, drink to you with a martini and thank the stars for our paths crossing”.

Cornwell’s first thriller, Call For The Dead, was published pseudonymously in 1961.

Two years later, the publication of The Spy Who Came In From The Cold, a story about an assignment to confront East German intelligence, brought him world-wide acclaim, and he decided to pursue writing full time.

Fellow authors Robert Harris and Stephen King were among those to pay tribute.

Mr Harris told Sky News: “I think he will be one of those writers who will be read a century from now, long after a lot of the rest of us I’m afraid are forgotten. He was a giant.

“He’s one of those writers who… also penetrated popular culture. That’s a great rarity and I’m not sure we’ll see the like of him again.”

King tweeted: “This terrible year has claimed a literary giant and a humanitarian spirit” and described The Little Drummer Girl as “one of the best novels I’ve ever read”.

Actor Gary Oldman, who starred in Tinker Tailor Soldier Spy, posted a tribute saying Cornwell was “a very great author, the true ‘owner’ of the serious, adult, complicated, spy novel – he actually owned the genre… He was generous with his creativity and always a true gentleman”.

Margaret Atwood tweeted that Cornwell’s Smiley novels were the “key to understanding the mid-20th century”, historian Simon Sebag Montefiore called him “the titan of English literature up there with the greats … in person, captivating and so kind and generous to me and many others”, while Brazilian author Paulo Coelho said: “John Le Carre, you were not only a great writer, but a visionary. Enjoy your new home #Rip.”

Stephen Fry tweeted that “if there is a contemporary writer who’s given me richer pleasure I can’t for the moment name them”, while quiz show host Richard Osman called Cornwell “the finest, wisest storyteller we had”.