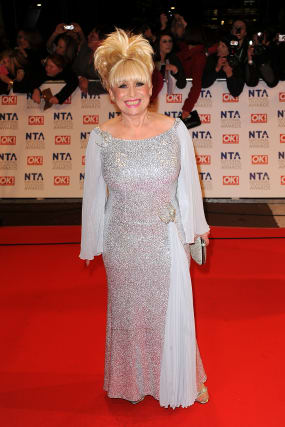 The much-loved EastEnders and Carry On actress, who suffered from dementia, died aged 83 on Thursday evening at a London care home, husband Scott Mitchell said.

The EastEnders cast lined up to remember the actress who played Queen Vic landlady Peggy Mitchell, while other stars paid tribute to the woman dubbed “the unofficial Queen”.

The BBC One soap said in a statement that it was “deeply saddened that we’ve lost our Dame”.

“From the moment Barbara stepped foot in Walford she created an icon in Peggy Mitchell, our formidable landlady, who the audience instantly fell in love with,” it said.

“But to all of us at EastEnders, she was our dearest friend who was truly loved and adored by everyone.”

“When anyone ever asked what she was like, I would always say she was everything you would hope she would be, and more,” he said.

Letitia Dean, who stars as Sharon Mitchell, said the actress “will be missed beyond measure”.

She said: “They broke the mould when they made Dame Barbara Windsor, there will never be another like that incredible woman, everyone who met her loved her and she will be deeply missed.”

Shane Richie, who played Alfie Moon in Walford, said in a statement to the PA news agency: “I’m absolutely devastated as Barbara was a friend as well as my TV boss in the Queen Vic.

“We shared many a story in between filming – to amazement of situations (we found ourselves in) to laughter.”

Adam Woodyatt, who plays Ian Beale, said: “I grew up watching ‘Babs’ in the Carry On films and for me to then work with her was a privilege and honour.

“I have so many happy memories and moments that I will always cherish, even when Peggy floored Ian with a punch.”

Larry Lamb, who played Peggy’s love interest Archie Mitchell, recalled the first time the pair met on the set of the BBC soap.

“The reason I was there was because she decided she wanted a new man in her life in the show, and I was the one that got chosen,” he told BBC Breakfast.

“And she just looked at me because she was such a tiny thing, I did not realise, and she said: ‘You are tall, never mind darling, we’re all the same height lying down.’

“She was larger than life. She was the head girl at EastEnders, she was the one everybody respected and she liked everything to run smoothly.

“She was an old-school actress… She knew how to keep everybody together and make it a team, she was really special.”

He said she made her mark in the Carry On films as this “extraordinarily funny lady… very sexy, very funny, very alluring, very naughty”.

Danny Dyer, the soap’s Mick Carter, wrote on Instagram: “Rest in Peace Babs. There is only one Dame in my eyes. So grateful to have known ya. You was a beautiful rare one.”

The Prince of Wales and Duchess of Cornwall wrote, on the Clarence House twitter account, that the actress was a “great British actor and tireless charity campaigner who will be deeply missed”.

Patsy Palmer, who played Bianca Jackson on EastEnders, wrote on Instagram: “We shared such magical times together and I’ll cherish every one.

“I can hear that laugh now as I sit and think about her. I hope it’ll ring in my ears forever. She always looked out for me.”

Danniella Westbrook, who played Dame Barbara’s on-screen daughter Sam Mitchell, tweeted: “My heart is broken. Bar you will always be in my heart forever.”

Former EastEnders actress June Brown said in a statement she is thinking of Dame Barbara’s “very loving husband Scott, who has created a legacy for her by training to run marathons in her name, owing to her great popularity, to raise an enormous amount of money in aid of the charity Dementia Revolution”.

“Working with you, spending time with you, and being your friend was the one of the greatest thrills of my life.

“You were the unofficial Queen of England, an icon for over half a century and treasured by the nation,” he said.

Prime Minister Boris Johnson paid tribute during a visit to Blyth in Northumberland, saying “she was one of those people that just cheered you up, and cheered everybody up because she had a kind of irrepressible naughtiness that was totally innocent.

“And whenever she went into a room, and she did a lot of good work for charity and looking after lonely and vulnerable people, she lit up people’s faces.”

He tweeted: “Barbara Windsor in real life was everything you might have hoped for. So warm, so funny, so kind. Goodnight sweetheart.”

Phillip Schofield wrote: “Farewell to gorgeous Barbara Windsor a real icon, showbiz lost a lot of sparkle today sending love to Scott and all her family.”

Amanda Holden wrote on Instagram: “I was a big fan and was thrilled to meet Barbara on several occasions .. she was an absolute joy. . #queenofourhearts .. Goodnight … my thoughts go out to her wonderful husband Scott.”

Lucy Benjamin, another of Dame Barbara’s former EastEnders co-stars, posted: “What a sad sad day. Rip my darlin Babs. You were a true star in every sense.”

Ex-EastEnder Ricky Norwood tweeted: “Such sad news to wake up to. I was lucky enough to work with her .. full of energy, Big smile, so warm and welcoming.

“Loved that you always had time for young actors and fans. Legend. We miss you already.”

Former Coronation Street actor Shayne Ward tweeted: “I had the pleasure of meeting Barbara Windsor in 2016 and she had the kindest most beautiful soul.

“A true British icon with a heart full of Joy, Laughter & warmth. I will never forget the words you said to me.”

Actress and presenter Kym Marsh, who also appeared in Coronation Street, said: “Sleep tight beautiful Barbara Windsor. A screen icon, a legend, genuine, funny and kind. It was an honour to have known you. You will be missed by so many. Sending much love to Scott and all of their family and friends.”

Les Dennis tweeted: “So very sad to hear that Barbara Windsor has died. She was a great talent and a lovely woman.”

Actress Sheridan Smith wrote: “She was one of my idols… and she could not have been nicer.

“What a career and what a woman. Our national treasure. Rest in peace.”

“She was also a fabulous actress with the world’s most infectious giggle. Absolutely loved her. RIP Babs, and thanks for all the laughs.”

Susanna Reid wrote: “She always had that twinkling smile when you met her, she was kind and good-humoured. She was gorgeous.”

Doctor Who star John Barrowman said: “She was a small woman but feisty and she had the biggest, biggest heart in the business.”

Sir Elton John said: “The world has lost the biggest ray of light. And heaven has the sweetest and funniest angel.”