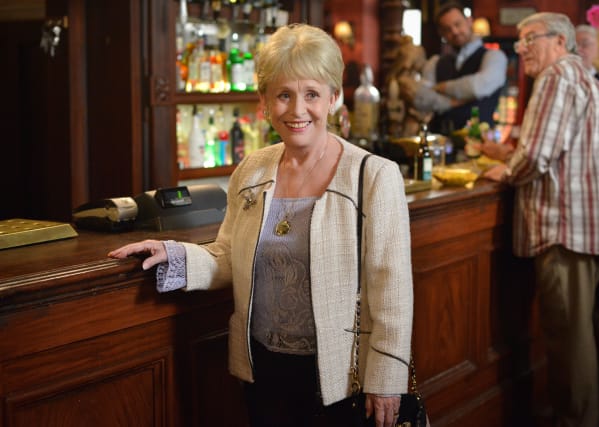 The character of Peggy Mitchell was a Walford favourite from the moment she arrived in 1991 until the character’s death in 2016.

The feisty landlady was played by Jo Warne until Dame Barbara Windsor took over the role in 1994.

Peggy refused to take any nonsense from anyone and would sharply dispatch anyone who upset her with her catchphrase: “Get outta my pub!”.

During her time in Albert Square, Dame Barbara was part of some of the BBC soap’s most memorable scenes in the role.

We take look at some of them.

The pint-sized publican battled breast cancer in 1996 and then again in 1999, when she decided to have a mastectomy.

Hundreds of viewers wrote to the BBC praising Dame Barbara and EastEnders for the way the difficult subject was tackled.

Peggy’s sharp tongue was not the only weapon in her arsenal – she also liked to give her enemies a good slap when she got really riled.

Several characters were on the receiving end over the years.

In 2000, Peggy discovered husband Frank Butcher (Mike Reid) was having an affair with his ex-wife Pat (Pam St Clement) and was planning to run away with her.

Peggy humiliated the couple in front of everyone in the Queen Vic by reading out a letter detailing their plan to flee.

“One thing I’ve learned since I’ve been married to Mr Butcher is never underestimate his capacity to make a cock-up of things,” she cried before slapping them both.

Peggy had high hopes for a fun family Christmas after finding out about Frank and Pat but her plans went awry.

Alone in the pub, she took out her frustration on the fixtures and fittings, smashing it all up with a baseball bat.

One of Peggy’s finest moments took place after her daughter Sam was framed for the murder of Den Watts (Leslie Grantham) by his wife Chrissie (Tracy-Ann Oberman).

When Peggy discovered the truth, she stormed to the graveside and screamed: “Chrissie Watts! Murderer!”

She then lunged at Chrissie and pushed her into her husband’s grave.

In 2009, Peggy went to speak to the Mayor of London about litter and when he did not turn up vowed she would “give him a piece of my mind” if she ever saw him.

But soon afterwards Johnson wandered into the Vic and Peggy quickly changed her tune.

Appearing a little star-struck, she gushed: “I do so admire a man who devotes his life to serving society. I nearly went into politics myself, you know.”

In 2010, a crack-crazed Phil (Steve McFadden) torched the Queen Vic.

Peggy escaped but was devastated.

The blaze led her to take stock of her life and she decided to leave Albert Square.

“Go on, I’ll be fine. Go on, darling, go back inside,” she urged Phil, as she walked away.

In 2016, Peggy took an overdose after breaking the news to son Grant (Ross Kemp) that her cancer had returned and taken a “proper grip” on her.

In a poignant final scene, after smelling cigarette smoke throughout the episode, Peggy hallucinated the return of her former love rival-turned-friend Pat Butcher (Pam St Clement), puffing away in thick pink lipstick and with “earrings rattling like Marley’s bleeding chains”.

Speaking to her friend, who passed away in the soap in 2012, Peggy said: “I’m being eaten alive and it hurts and I can’t wait.”

She added: “I will go as I have lived: straight back, head high, like a queen.”