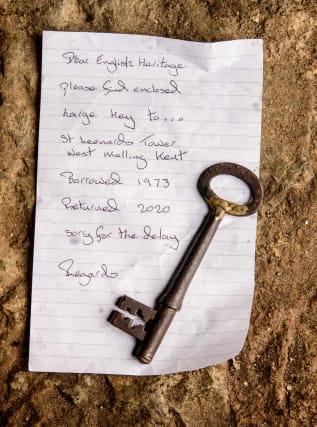 A key which opened the doors of an 11th Century tower has been returned almost 50 years after it disappeared.

The brass key was sent by post to English Heritage, with an anonymous note admitting it had been “borrowed”.

The mystery sender apologised for the delay in returning the large object.

The key still fits in the keyhole of the doors to St Leonard’s Tower, a Norman tower in Kent, although it no longer rotates.

New locks were built into the Tower, constructed between 1077 and 1108, some time after the key’s disappearance.

English Heritage said the key, thought to be around 100 years old, was “inexplicably” returned “with a tantalising note”.

“Sorry for the delay. Regards.”

Roy Porter, English Heritage’s senior properties curator, said: “It’s certainly one of the most puzzling packages we’ve ever received and just in time for Christmas!

“It’s a modern mystery to add to the historical questions posed by the tower.”

St Leonard’s is said to be an early and well-preserved example of a small, free-standing Norman tower keep.

It stands on a natural sandstone ledge near the head of a narrow valley and was named after a chapel which once stood nearby.

Some believe the tower was once part of a castle, constructed by Gundulf, Bishop of Rochester, while others say the builder was Bishop Odo of Bayeux, half-brother of William the Conqueror.

But very little is known about the history of the building or its original purpose.

English Heritage wants to “reward the honesty of whoever returned the key with a gift of membership”.

A spokeswoman told the PA news agency: “We don’t know how it went missing. We have no idea who would have taken it.

“We are hoping this person comes forward and helps us connect the dots.”

She added: “It was sent to the customer services team. Everyone was incredibly surprised about receiving this key and excited about it being returned after so long.”

English Heritage is asking the sender of the note to get in touch with its Customer Services team on 0370 333 1181 or email customers@english-heritage.org.uk, saying that unlike library books, there is no fine for a late return.