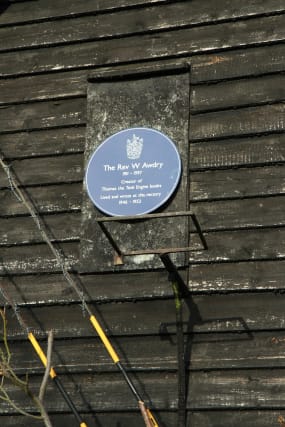 A blue plaque has been unveiled at the former rectory where Thomas And Friends author Rev Wilbert Awdry lived.

The tribute has been installed at the Old Rectory of The Holy Trinity Church in the village of Elsworth in South Cambridgeshire.

Rev Awdry, who introduced the world to Thomas The Tank Engine 75 years ago, was rector at the church from 1946-1952. Many of his books were published while he was there.

Responding to the blue plaque, which was unveiled by the Cambridge & District Blue Plaque Scheme, Rev Awdry’s daughter Veronica Chambers said: “I am delighted and moved at the news that in this 75th Anniversary year, a blue plaque has been put up at the Old Rectory in Elsworth, in tribute to my father, the man who wrote the stories about Thomas and engines with personalities… but who was also, most importantly, a very dedicated and hardworking rector.”

Rev Awdry, an Anglican clergyman who died in 1997 aged 85, created Thomas And Friends initially as a way to entertain his son, Christopher, who later took over as author.

Speaking on Desert Island Discs in 1964, Rev Awdry explained why railways inspired him.

“He likes you to know how he’s getting on and how he’s feeling about things. On the move, locomotives, always have something to say.”

Thomas And Friends is now a globally popular brand and the characters have featured in numerous TV shows and films.

In April, the Duke of Sussex spoke of his “fond memories” of growing up watching Thomas & Friends, as he filmed an introduction to a special episode featuring the Queen and a young Prince of Wales as characters.

The Cambridge & District Blue Plaque Scheme is run by charity Cambridge Past, Present & Future, largely with the help of volunteers.