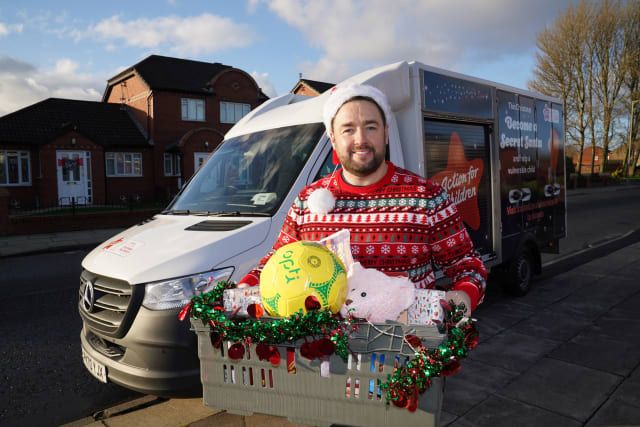 The comedian, 39, met with families who are benefitting from the initiative which encourages the public to give a virtual gift such as a hot meal, a pair of shoes or warm winter clothes this Christmas.

Manford, who delivered Iceland orders during the first national lockdown, wore a Christmas jumper and travelled in a Secret Santa van as he made his rounds.

He is encouraging people to donate £10 towards the charity, so that they can ensure that children are looked after on Christmas Day.

Iceland Foods Charitable Foundation is the lead partner for the campaign and has made a donation of £280,000 to Action for Children by signing up all 28,000 of its workers to the charity’s Secret Santa campaign.

Manford said: “This Christmas will be so different for all of us but for some people it will be a huge struggle, with many facing a reality of choosing between paying the bills or feeding their children, before they can even think about Christmas presents.

“I met some amazing families last week, who through no fault of their own are facing real challenges, made worse by the pandemic. I was heartened to see the support provided by Action for Children for myself.”

Melanie Armstrong, chief executive at Action for Children, said: “We’re absolutely delighted to be partnering with the Iceland Foods Charitable Foundation for our Secret Santa campaign this year. It’s fantastic to see that Jason Manford has signed up to be a Secret Santa too, alongside 28,000 amazing Iceland colleagues. Thank you Jason.

“This generous support will help our frontline workers to deliver life-changing support including giving vulnerable children across the UK a hot meal at Christmas time.

“As many families go through one of the most difficult festive seasons they have ever faced, the help we provide is needed more than ever before.”

Richard Walker, trustee of the Iceland Foods Charitable Foundation, said: “When we heard about the Secret Santa campaign, we knew we had to help in any way we could, and what better way of supporting it than by making our 28,000 colleagues Secret Santas themselves.

“Child poverty and food insecurity are issues very close to our hearts as a charitable foundation and something that our colleagues work hard to alleviate.

“We are delighted to support the work of Action for Children in communities across the UK, especially in a year which has seen many families face tougher challenges than ever.”

In June Manford, who recently hosted the Royal Variety Performance, spent a day dropping off groceries for Iceland in his local community in Cheshire.

His temporary career change came after he said he was turned down for a job at Tesco.

To sign up and make a donation visit Iamsanta.org.uk/2020.