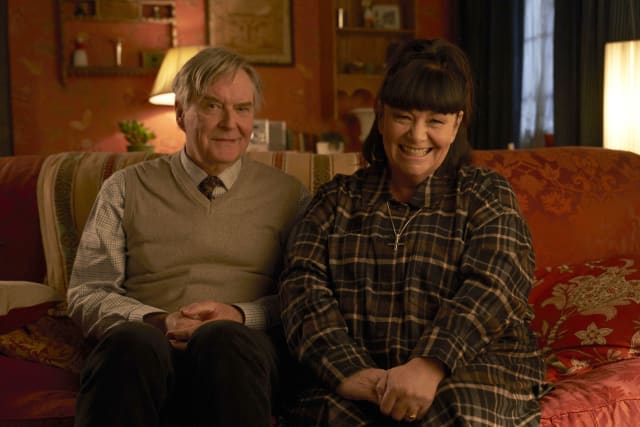 Reverend Geraldine Granger will take the knee and deliver a sermon about the anti-racism movement as the BBC comedy returns for a series of Christmas specials.

The show trended on Twitter over the weekend, with some claiming the scene showed a lack of impartiality at the broadcaster.

In an apparent response, French tweeted: "A lovely calm day, full of humanity, compassion and support all round..."

The 63-year-old later clarified in the comments that she was being "a tad ironic".

The scene in question, which features in one of three short lockdown specials, will see the vicar address the killing of George Floyd and the broader issue of racism.

The sketch begins with her being filmed by parishioner and farmer Owen Newitt as she emerges from her home after lockdown.

She tells the audience she has been preoccupied with the "horror show" of Mr Floyd's death and what she describes as "this Black Lives Matter thing".

Mr Floyd, an unarmed black man, was killed in May while being arrested by police in Minneapolis, Minnesota, sparking anti-racism protests around the world.

In the sketch, the vicar admits that Dibley, the fictional village in Oxfordshire where the show is set, is "not the most diverse community".

"And, listen, I am aware all lives matter, obviously, but until all lives matter the same we are doing something very wrong. So I think we need to focus on justice for a huge chunk of our countrymen and women who seem to have a very bad, weird deal from the day they are born."

She then walks to the parish noticeboard and tears down two posters, one about decimalisation and the other about a missing button.

After replacing them with a home-made Black Lives Matter poster, she takes the knee.

The scene strikes a more serious tone than the rest of the episode, in which she discusses online quizzes and alcohol consumption.

French has previously shown her support for the movement, tweeting: "Black Lives Matter. This is a fact not a slogan."

Written by the show's co-creators, Richard Curtis and Paul Mayhew-Archer, the lockdown episodes will see the vicar communicating with her parishioners via video call.