Andrew Lloyd Webber confident there will be theatre audience ‘in droves’ 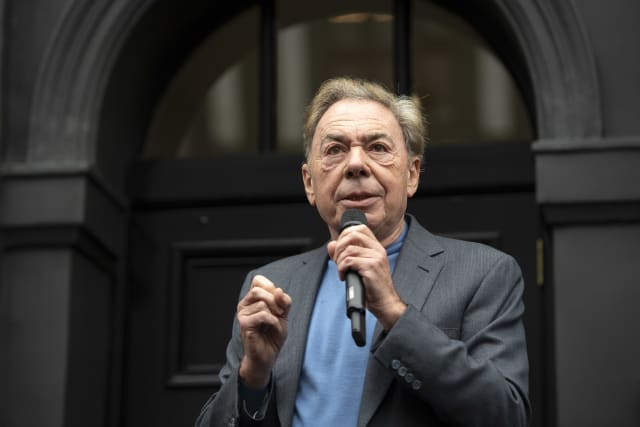 Andrew Lloyd Webber has said he is confident there will be “an audience in droves” when live theatre returns and he is a “cock-eyed optimist” this will be by spring next year.

The composer, who took part in the Oxford Covid vaccine trial, has announced the reopening of most of his theatres after the venues were closed due to the pandemic.

Previews of his new musical Cinderella, written by The Crown star Emerald Fennell, will begin on April 30 at the Gillian Lynne Theatre in London’s West End.

He told The Andrew Marr Show: “One cannot be 101% sure that it’s going to be possible but my hunch is that a combination of the fact that treatments are getting better now, even to those unfortunate enough to have to go to hospital, but I also think that the vaccine will be pretty widely rolled out at that time.”

He added: “So as they say in South Pacific, I’m a cock-eyed optimist but I really, really do believe we will certainly get back to normal by the middle of the summer theatre-wise.

“Will there be an audience?

“I think there will be an audience in droves, I just simply have a feeling there is a pent-up demand ready to come and see live entertainment of all sorts.”

Explaining why he took part in the vaccine trial, he said: “I went on the trial in June and had my first vaccine then and it came about literally because I applied.

“I said I wanted to go on it and they seemed to want somebody of my advanced age so I was taken on board.”

The West End will also see the return of the classic The Phantom Of The Opera at Her Majesty’s Theatre in June 2021.

A musical adaptation of the Disney film Frozen will arrive at the recently refurbished Theatre Royal Drury Lane in the spring.

The new musical adaptation of Back To The Future will be performed as the Adelphi Theatre also reopens next June.

Matilda, a collaboration between comedian Tim Minchin and the Royal Shakespeare Company, will return to the Cambridge Theatre in Covent Garden in the late spring, with a date still to be set.

The Other Place, a smaller theatre part of Lord Lloyd-Webber’s LW Theatres group, previously announced it will reopen at the end of June 2021.

Hospitality and entertainment sectors have been substantially impacted during the pandemic, with most of the sectors forced to shut during lockdowns.

In areas under Tier 3 restrictions, all indoor entertainment venues must stay closed.

Under Tier 2, in areas including London, venues have been allowed to reopen at a reduced capacity.

However, there will be no mixing of households inside and alcohol can only be served alongside a substantial meal at the bar or to be consumed while seated.

The Theatres Trust has previously said that it is not viable for many theatres to reopen with social distancing measures in place.