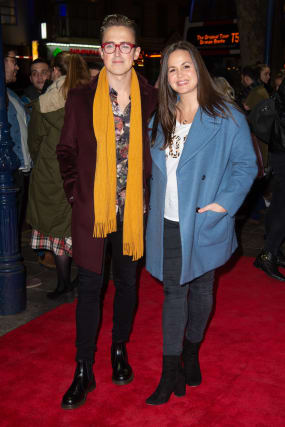 Tom Fletcher has shared an adorable video of the moment his son heard his mother Giovanna had won I’m A Celebrity… Get Me Out Of Here!

The McFly singer shared a video on Instagram showing his son’s reaction to the live final of the ITV show.

Buzz, six, covered his mouth with his hands as he sat in his father’s lap as Ant and Dec announced the podcast host had beaten radio DJ Jordan North.

As Fletcher gasps and shouts “Yes! She did it!” the little boy can be seen shouting: “Mummy! Mummy won!”

“It’s been the most amazing experience.”

North said he “couldn’t have lost to anybody better”.

Fletcher also shared a video in which he says: “She did it, we cannot believe it,” while Buzz adds: “Thanks everyone for voting.”

He captioned it: “Thanks everyone who voted for @mrsgifletcher. We are so proud of our Queen!”

He also joked that a screenshot of her shocked face when she was announced as the victor would be used as their Christmas card.

He wrote: “The moment! That’s this year’s Christmas card sorted!”

Giovanna told spin-off show I’m A Celebrity… The Daily Drop, that her win had not yet sunk in.

She said: “I don’t think it’s going to sink in for a little while. It’s the most bizarre thing ever.

“We’ve been in a castle for three weeks and now there are people, I’ve got a crown on my head. It doesn’t feel real at all.”

She added that her children are likely to already be taking inspiration from the show and said: “I can already imagine that trials are happening at home.

“We’re going to be taking inspiration from them and making up games. If they’ve not already. I can imagine snakes being made and all sorts.

“Soon as I’m home I’m just going to have loads of kisses and cuddles and immerse myself back into reality. And just normality, normal life.

“It feels weird because we don’t know what’s going on in the world.”

I’m A Celebrity… The Daily Drop, hosted by Vick Hope, is available on the ITV Hub.