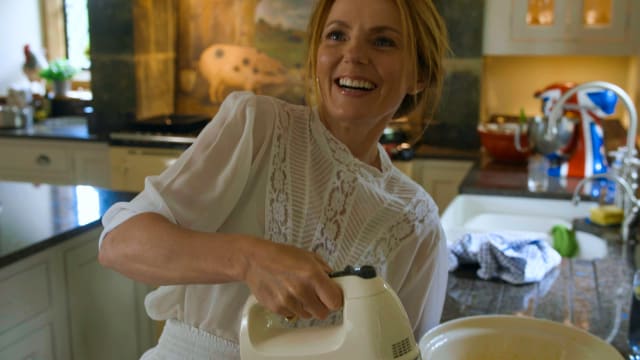 Geri Horner has revealed how motherhood has helped heal her difficult relationship with food.

The Spice Girls star, 48, said she always wanted her daughter Bluebell to have a healthy relationship with eating.

In the latest episode of her YouTube series Rainbow Woman, she is joined by her 14-year-old child to bake a Swiss roll and discusses how taking part in The Great Sport Relief Bake Off in 2016 helped her to discover the joy of baking after years of battling with eating disorders when she was younger.

She says: “I only did Bake Off because my daughter loves that show and, when I did, I re-embarked on this whole journey of me re-establishing my relationship with food.

“I realised actually you can start loving it, having fun with it, and it’s a way of relating with people – and it reminded me of when I was little and I was making cakes with my aunty Doreen.

“I had always wanted a good relationship with food so my daughter would have it, so she wouldn’t be like I was when I was growing up – always on a diet and had no interest whatsoever.

“As a world we are moving in a different direction now anyway. Yes, we want to be gorgeous but we’re letting go of perfect. I think we’re bored of it.”

The latest episode of Rainbow Woman will be available on YouTube on December 6 at 2pm.