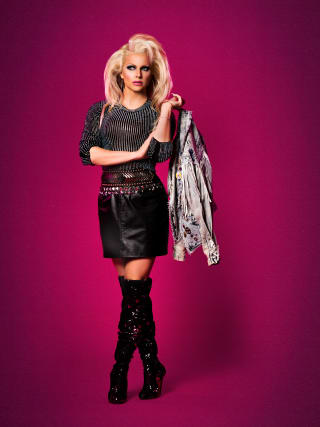 Courtney Act has spoken of her excitement at starring in one of the first West End shows to return following lockdown.

The Australian drag artist appears in Death Drop, a socially distanced murder mystery featuring a full drag cast, which opens for previews from December 4 at the Garrick Theatre.

The cast, which features RuPaul’s Drag Race star Monet X Change, has been rehearsing in a bubble during the lockdown with regular temperature checks and coronavirus nasal tests in the hope London would go into Tier 2 and the production would be able to go ahead.

“There was a round of applause at rehearsal when one of the producers was like, ‘London’s in Tier 2’. It was lovely.

“I think I was a lot more pessimistic – or perhaps realistic – on the inside. I didn’t think we would be coming out of the lockdown today, but we did.

“Every now and then, a politician can keep a promise. Who knew?”

In what will be her West End debut, the Celebrity Big Brother winner will play the role of 1980s pop star Shazza, whose fame has faded over the years, while Monet X Change will star as Summer Raines, a glamorous American weather girl living in London.

Speaking about being among the first shows to return, Act said: “It’s exciting. We have been rehearsing for the last couple of weeks.

“I know everybody has been locked at home but we have been being nasally penetrated twice a week and temperature checked every day in our little rehearsal bubble.”

The production has been forced to confront challenges such as how to re-enact murder on stage while maintaining social distancing.

Act said: “Murder from 1.5 metres is challenging. There is a slapping scene where we ask the audience to further suspend their disbelief.

“We have a long-distanced soap opera bitch slap moment, complete with a nod to EastEnders as well – ‘You ain’t my mother!’

“Just those little things. Everyone being aware backstage in the theatre obviously.

“We, like everywhere, walk one direction up the staircase and make sure we don’t spit in each other’s mouths.”

Show organisers described it as a “rampant, raucous, ridiculous romp of a murder mystery” with “gallons of gags, and more twists and turns than a drag queen’s wig”.

The capacity at the Garrick Theatre has been reduced to comply with Covid-19 guidelines, with other measures including contactless tickets, temperature testing and the deep clean and sanitation of the theatre.

Death Drop – The Dragatha Christie Murder Mystery is at the Garrick Theatre from December 4 until January 17. For tickets, visit deathdropplay.com