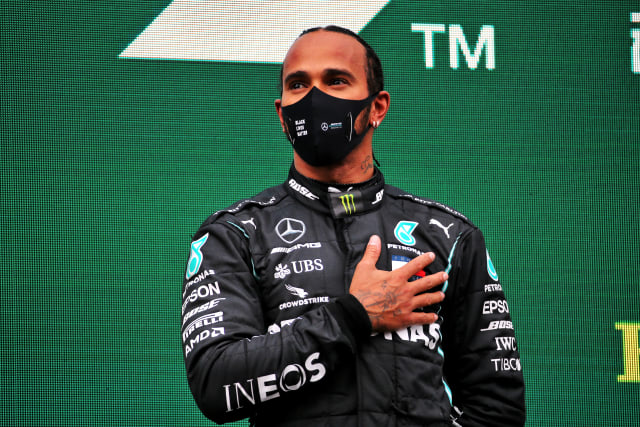 Lewis Hamilton has been named game changer of the year ahead of the GQ Men Of The Year Awards.

The racing driver, who won a record-equalling seventh Formula One world championship earlier this month, will be honoured at the awards ceremony on Thursday evening.

He told GQ he thinks his driving is still improving.

“I’m getting stronger and I didn’t expect that. And I didn’t know at what point I was going to plateau, but I’m realising that I’m getting better and that is a great feeling.”

He added the improvements do not come “without the hard work”.

Hamilton also reflected on his decision to take the knee at races as a display against racism.

“I started experiencing racism when I was five and people looked upon it so lightly, when someone would throw out these words, the bullying and the beatings and intimidation,” Hamilton said.

“My dad always said, ‘Do your talking on the track’, so I held my tongue, but we suppress a lot of things and all my suppressed emotions came up and I was like, ‘You know what? I have to do something. I cannot stay silent’.

“If we all stay silent, it will continue for generations. I look at my niece and nephew and do not want them to experience what I experienced.”

He also discussed the sport’s ban on drivers promoting political slogans during races.

Hamilton wore a T-shirt at the recent Tuscan Grand Prix which read: “Arrest the cops who killed Breonna Taylor.”

Taylor, a 26-year-old black woman, was shot dead by police in her home in the US in March.

Hamilton said he “will do it again”.

“We don’t live in a time when everything is OK. And I remember as I went through the day I was like, ‘OK, I’ve got to win this race. I can’t come second and wear this top’.”

He said he was “racing my heart out” for the victory.

“And I put that shirt on and in the 70 years of our sport, no-one’s ever stood up there for anything but themselves,” he said.

“And I was standing up there for someone else.”

GQ Men Of The Year Awards 2020 in association with Hugo Boss is available to view via British GQ’s YouTube channel on Thursday at 8pm.