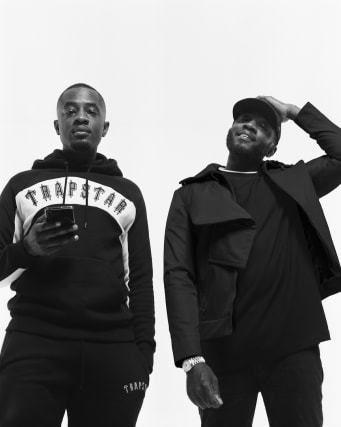 Alec has spent more than a decade hosting shows on BBC Radio 1Xtra and has worked at Warner Music, most recently as co-head of A&R at Atlantic, for seven years, with stars including Jess Glynne, Stormzy and Nigerian singer Burna Boy.

His brother Alex takes on the role of co-president after a decade at Universal Music UK, most recently as president of Island Records’ urban division.

He oversaw campaigns for Drake, Giggs and Buju Banton and spearheaded the launch of George The Poet’s debut book release.

Def Jam was co-founded in 1983 by acclaimed producer Rick Rubin in his dormitory at New York University, with the aim of releasing a single by his punk rock group Hose.

He was joined by co-founder Russell Simmons, an established rap manager and promoter, and the pair signed early releases by LL Cool J and Beastie Boys, both in 1984, sometimes holding meetings in Rubin’s student halls.

The late 80s and early 90s saw Def Jam release a string of albums by pioneering rap acts including Public Enemy and EPMD.

In the mid-90s, Jay-Z signed a distribution deal after a bidding war and was later appointed Def Jam president.

His two-year tenure saw the arrival of future international stars Rihanna and Ne-Yo.

“Alec and Alex have always done things their own way with success always quick to follow. They have already assembled an exceptionally talented top team with a clear vision for this exciting new chapter in the history of one of the world’s most famous labels.”

“A space which will support both our teams and our artists to be the best version of themselves.”

Alex Boateng added: “Especially in these times, this is a real privilege. I’m proud our collective journey now includes partnering a legendary label with a style that only London and the UK can provide.

“Looking forward to watching and guiding where the music and art takes the journey next.”