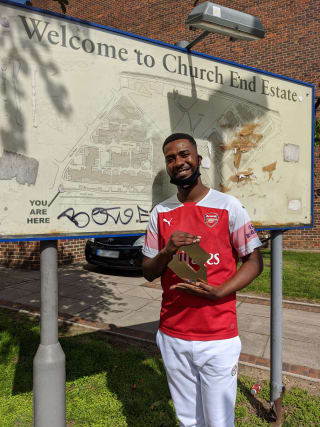 Nines leads the way at the Mobo Awards with a total of five nominations, crowning a year in which he scored his first number one album.

The 30-year-old rapper, from Harlesden, north-west London, is tapped in a number of major categories at the annual event celebrating music of black origin.

These include best male act, best hip hop act and album of the year for August’s chart-topping Crabs In A Bucket.

However, he faces competition from Stormzy, Lianne La Havas, Mahalia and Tiana Major9, who have three nominations each.

The awards, which are taking place online this year, will see the return of Maya Jama as host, after she became the youngest person to host the awards in 2017.

She will be joined by YouTube creator, music artist and comedian Chunkz.

In the best male act category, Stormzy and Nines go up against J Hus, Headie One, AJ Tracey and Young T & Bugsey.

Outside music, the best media personality award, which is voted for by the public, features Strictly Come Dancing star and radio presenter Clara Amfo, Jama and YouTuber KSI among others.

In the best performance in a TV show/film category, also voted for by the public, rapper and actor Kane “Kano” Robinson gets a nod for his turn as drug kingpin Sully in Top Boy.

Michaela Coel’s performance as Arabella in the critically acclaimed BBC One series I May Destroy You and Ncuti Gatwa’s turn as Eric Effiong in Sex Education are also honoured.

Organisers have promised the ceremony will feature “a strong vein of cultural purpose and social commentary” following the events of 2020.

Mobo founder Kanya King said: “Recognising the unique role the Mobo Awards plays for so many, and the challenging year we find ourselves in, it is now more important than ever to be there and to continue the rich history of showcasing the very best of black music and culture.

“We are proud to partner with YouTube and the BBC to bring this year’s celebration to millions of music fans, and continue to uplift creative voices here in the UK and around the world.

“A special thanks to Arts Council England, I Saw It First and Accenture for supporting us on this journey – we see you!”

YouTube Music’s director of EMEA, Dan Chalmers, said: “It’s a real privilege to be partnering with the Mobo Awards to bring a global audience to such an important British music event.

“It’s vital that artists and creators from across all backgrounds, genres and sounds are given a platform to build an audience and fanbase.

“I’m honoured to continue to lift up and support the black British music community, which continues to be at the heart of the music experience in the UK.

“I look forward to watching the nominees and winners on this special night and supporting them on their journey forwards.”

BBC Radio 1Xtra will host a show on Sunday December 6 from 9pm to 10pm, looking back at the Mobo Awards’ 24-year history.

Kate Phillips, acting controller of BBC One, said: “It’s fantastic to be partnering with the Mobo Awards this year and showcasing the UK’s biggest celebration of black music and culture on BBC One and iPlayer.”

– The virtual ceremony will be live streamed on YouTube from 7pm on December 9 and re-broadcast on BBC One at 10.45pm.