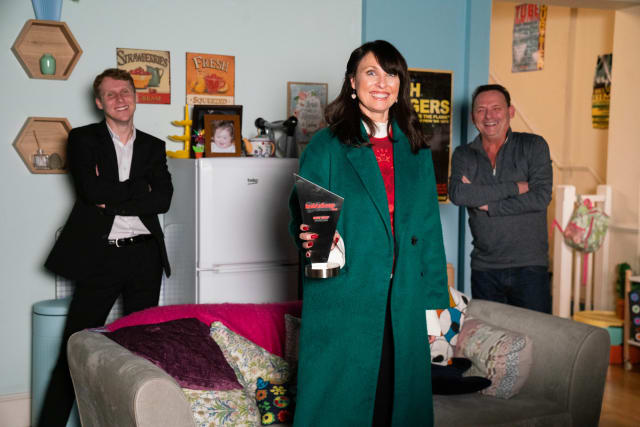 EastEnders was the big winner at the first virtual Inside Soap Awards, earning a total of five trophies including best soap.

Coronation Street was close behind with four trophies, including three for its acclaimed storyline showing Geoff Metcalfe's increasing coercive control over Yasmeen Nazir.

Jessica Plummer, who is currently competing in I'm A Celebrity ... Get Me Out Of Here! in Wales, was among the stand-out winners of the night.

She claimed the best actress gong for her role as Chantelle Atkins in EastEnders, after her character was murdered as part of a domestic abuse storyline.

Lorraine Stanley was honoured for the funniest performance for her turn as Karen Taylor, while Kellie Bright and Danny Dyer were voted best partnership as Linda and Mick Carter.

Responding to her win, Plummer said: "This is probably one of the biggest achievements of my career.

"It was an honour to even be nominated, so I'm completely blown away.

"I came off social media for a quite long time (for me!) after my final episode aired as I personally had to mourn my character and all the changes in my life, but, when I came back, the reception I got from everyone was so heart-warming.

"Chantelle was a loved character and it really was an honour to play her."

Responding to his joint win, Dyer said: "We have been through so much together on this show. It is always a joy to come and work with Kellie. She is a brilliant actress."

Yasmeen, played by Shelley King, fighting back against him was named the best show-stopper of the year.

He said: "For me, witnessing Shelley crumbling as Yasmeen, and watching this character that I was playing destroy her in front of me was actually really quite upsetting.

"I felt bad doing all those things, but we both wanted to do it as well and as truthfully as we could."

Speaking about the public reaction to the storyline, he added: "I did see the episode of Gogglebox where they watched it – they were all delighted that Geoff got some kind of comeback."