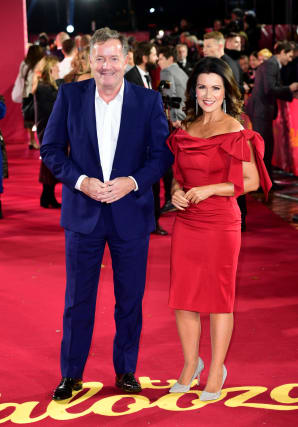 A cast of famous faces celebrated Piers Morgan and Susanna Reid as they marked their five-year anniversary as co-presenters on Good Morning Britain.

Richard and Judy, Vinnie Jones, Gary Barlow and Trisha Goddard were among the stars who shared messages with the pair on Monday morning.

Morgan, 55, joined Reid, 49, on the ITV programme when he stepped into the shoes of Ben Shephard in November 2015.

The broadcast saw Reid present her on-screen partner with a pair of puppets in an apparent nod to it being their wooden anniversary.

Morgan said: “Who would have thought it? It’s been a rocky road, to put it lightly, but we’re still here.”

Reid quipped: “Congratulations. You’ve put up with a lot as well.”

Addressing the pitfalls of early morning television, Morgan said: “It basically kills you. It destroys you, inch by inch.”

Looking back at images of them five years ago, Reid added: “There’s at least a stone of difference for both of us.”

Judy Finnigan and Richard Madeley, who presented This Morning between 1988 and 2001, appeared via video call to send the pair their best wishes.

Finnigan said: “You are a fantastic pair on television. You are both immensely watchable.”

Addressing Reid, she added: “But I do agree with everybody who is saying, ‘I don’t know how you get a word in edgeways.’

“You do get words in edgeways otherwise we wouldn’t even know you were there.

Madeley added: “Personally I think you should both start having a family now. That is the glue that will bring you together.”

There were also messages from Dame Joan Collins and Bond girl Britt Ekland among others, with Ulrika Jonsson raising a glass of early morning rum to them.

During the show, Lorraine Kelly tweeted: “Happy Anniversary! Surely there must be some sort of medal that can be awarded to @susannareid100 for her patience, endurance and awe inspiring restraint in not pressing the button on ejector seat I secretly had fitted.”

Fellow broadcaster Andrew Neil said: “Happy 5th to you both!! Delighted to be reviewing the papers with you shortly.”

Throughout the years the pair have become embroiled in a number of notable controversies including Morgan’s spat with Greggs over the bakery’s launch of a vegan sausage roll in 2019.

He said on Twitter: “Nobody was waiting for a vegan bloody sausage, you PC-ravaged clowns.”

Impersonating the 17-year-old, who has Aspergers, he said: “How dare you, how dare you?