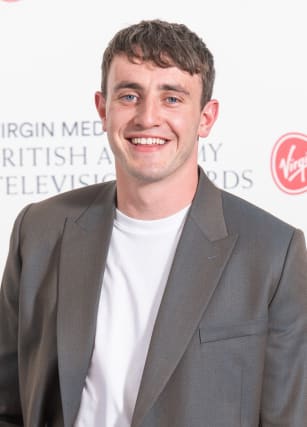 Paul Mescal has revealed that he and his Normal People co-star Daisy Edgar-Jones recently got together to rewatch the hit show in full while playing a drinking game.

The pair had been unable to watch the 12-part series, which aired on BBC Three in spring, with each other due to lockdown restrictions.

Mescal, who has been named breakthrough actor of the year at GQ’s forthcoming virtual Men Of The Year Awards, told the magazine the experience had been “very special”.

The 24-year-old, who made his TV debut in Normal People, said: “We hadn’t actually watched it together, Daisy and I.

“Because of lockdown, we hadn’t done that, so last week we got together and watched the whole thing through.

“We actually ended up playing a little drinking game: every time Connell wouldn’t complete a sentence or any time Marianne would make an emphatic statement that made Connell uncomfortable we did a shot.

“We ended up talking over most of it, just reflecting on particular days, costume changes, memories.

“It was very special to get to do that with her. The thing we shared – will always share – is so unique.”

The Irish actor also reflected on finding overnight fame following the success of the show.

Asked what it was like being in the middle of a media storm, he said: “Brutal, if I am honest with you. Totally brutal.

“At first you think ‘Oh, this is a bit glamorous’ when someone is taking a picture of you buying ready-to-eat avocados and cigarettes at the off-licence, but soon enough you feel it begin to infiltrate your brain.”

Mescal also addressed his decision to give up Gaelic football and focus fully on pursuing acting after suffering a jaw injury.

He said: “I played it on the sly for two years. I had already decided to give it up in my final year but then I got slapped pretty hard across the face and my jaw snapped.

Normal People was co-written by Alice Rooney, who wrote the original 2018 novel, and Alice Birch, and was directed by Lenny Abrahamson, who was nominated for an Oscar in 2015 for Room, and Hettie Macdonald, who directed the mini-series Howards End.

It came as Dylan Jones, editor of GQ, announced Mescal as the recipient of the breakthrough actor of the year award ahead of the GQ Men Of The Year Awards 2020.

Jones said: “The artists who have helped us get through two lockdowns by entertaining us have felt important – a crucial outlet, a way of escaping our world by entering theirs.

“GQ are proud to celebrate Paul Mescal, the Emmy-nominated actor who became a heartthrob overnight and whose performance in Normal People was stellar.”

– GQ Men Of The Year Awards 2020 in association with Hugo Boss can be viewed on British GQ’s YouTube channel on Thursday November 26 at 8pm.