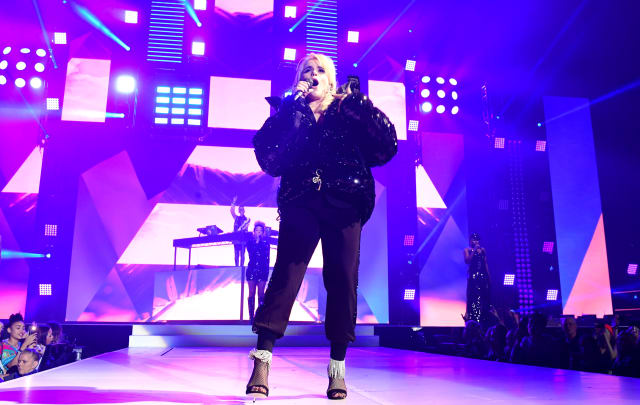 Paloma Faith has said she feels “vulnerable” being pregnant in the public eye but decided to be open about her second pregnancy in order to “burst the bubble”.

The London-born singer, 39, welcomed her first child with her long-term boyfriend, the French artist Leyman Lahcine, in December 2016 although they initially decided not to reveal the child’s gender in a bid to maintain their privacy.

In September this year, she announced she was pregnant once again after a “struggle” involving six rounds of IVF treatment.

She said: “I do think I feel quite vulnerable being pregnant in the public eye. I don’t feel like I have a huge amount of choice in the matter because it sort of happens when it happens. But I feel like it is something I need to embrace rather than hide from.

“The first time I did it I hid away from the public eye and this time I have made a conscious effort to just say: ‘This is what is happening and this is what it looks like and feels like’. I’m not sugar coating and I am quite honest about the aches and pains and all of that.

“I feel like when women have kids, especially women who are successful in their work, they expect themselves or they are expected to almost deny or dumb down what they have done in order to be aligned with their male counterparts.

“The reality is it is really difficult and it is physically so demanding to do that and then work at the same time. I have decided as a little project to use myself as an example and burst the bubble.”

On top of recording her album, Faith has also been filming the second season of DC Comics’ Pennyworth where she plays the villainous Bet Sykes.

Addressing the workload, she added: “I guess it is a post-feminist generation who felt obliged to pretend they were almost masculine, so they were still feeding into a patriarchal construct of how they would work.

“I’m trying to do the opposite of that because I think mothers become very efficient because they are juggling all of these things at the same time. And they are not often acknowledged for it.”

She quipped: “The best way I can describe it to a male is that it is a little bit like when you have a really bad hangover and you feel like you are going to die and nobody gives you any sympathy because it was your choice. It’s sort of like that.”

Faith, originally from Hackney in east London, also hailed the recent election success of US president-elect Joe Biden and vice president-elect Kamala Harris as a great moment for her young daughter.

She said: “I feel really moved. For my daughter I feel like Kamala Harris is an unbelievable symbol of hope.

“She has gone against all the odds being mixed heritage and a woman, against this awful tyrant (Donald Trump).

“I just don’t understand how we live in a world where a man like that can have so much power.

“It was the good news that we needed because it feels like 2020 has had not very much good news. It felt like a time of hope.”

Infinite Things by Paloma Faith is out now.