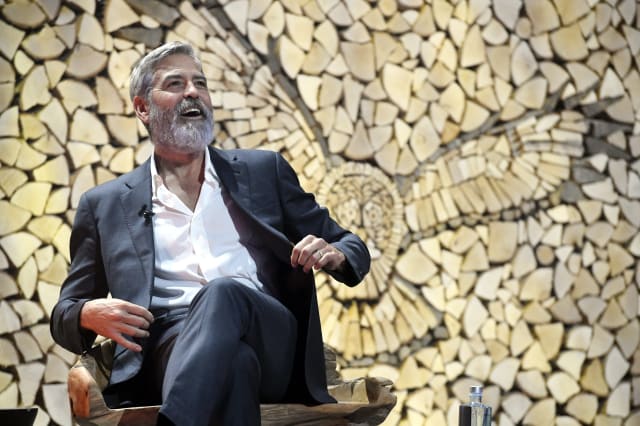 George Clooney has confirmed he once gave 14 of his closest friends a million dollars (£754,000) each in cash and revealed he had to drive through Los Angeles with the money in the back of a disguised van.

The Hollywood actor, 59, had just starred in 2013 sci-fi thriller Gravity, which proved much more successful than expected, leaving Clooney with a financial windfall.

It was around the time he met his now-wife Amal, though he was still single and said he had no plans of starting a family. The couple have since had twins.

Oceans star Clooney told GQ magazine he decided to celebrate Gravity's success by sharing his wealth with his friends.

He said: "And I thought, what I do have are these guys who've all, over a period of 35 years, helped me in one way or another. I've slept on their couches when I was broke.

"They loaned me money when I was broke. They helped me when I needed help over the years. And I've helped them over the years. We're all good friends. And I thought, you know, without them I don't have any of this.

To pick up the 14 million dollars, Clooney revealed he had to go to an undisclosed location in downtown Los Angeles where they had "giant pallets of cash".

He used an old van that had "Florist" written on it and loaded it up with the money. Clooney only told his assistant and "a couple of security guys".

Clooney added: "And we brought it up, and I bought 14 Tumi bags, and then I packed in a million bucks, cash, which isn't as much as you think it is, weight-wise, into these Tumi bags."

He invited his friends to his home the next day. He said: "And I just held up a map and I just pointed to all the places I got to go in the world and all the things I've got to see because of them. And I said, 'How do you repay people like that?'

"And I said, 'Oh, well: How about a million bucks?' And the fun part about it was: That was the 27th, the 28th of September. A year later, on the 27th of September, just by happenstance, was the day I got married."