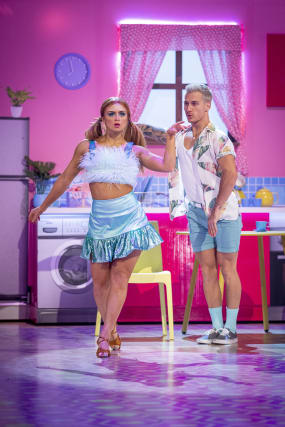 EastEnders actress Maisie Smith and her professional partner Gorka Marquez will salsa to Better When I’m Dancing by Meghan Trainor when they return to the Strictly dancefloor after dodging elimination last week.

The couple were saved after the judges opted to send home The Wanted’s Max George and his partner Dianne Buswell during the dance-off.

Actress Caroline Quentin and Johannes Radebe will cha cha to Rescue Me by Fontella Bass, while broadcaster Clara Amfo and Aljaz Skorjanec, who topped the leaderboard last week, will perform a samba to That’s The Way (I Like It) by KC And The Sunshine Band.

Meanwhile Good Morning Britain’s Ranvir Singh and Giovanni Pernice will attempt an Argentine Tango to When Doves Cry by Prince.

Comedian Bill Bailey and Oti Mabuse will take to the floor for an American Smooth to I’ve Got You Under My Skin by Frank Sinatra, while singer HRVY and Janette Manrara will tango to Harry Styles’s track Golden, and reality star Jamie Laing and Karen Hauer will do a couple’s choice routine to Gonna Make You Sweat (Everybody Dance Now) by C+C Music Factory.

TV presenter JJ Chalmers and Amy Dowden, who were at the bottom of the leaderboard last week, will hope to dazzle the judges with a quickstep to For Once In My Life by Stevie Wonder.

Anton du Beke will once again be on the judging panel while Motsi Mabuse self-isolates at home following a trip to Germany.

Strictly Come Dancing continues on Saturday at 7.15pm on BBC One.