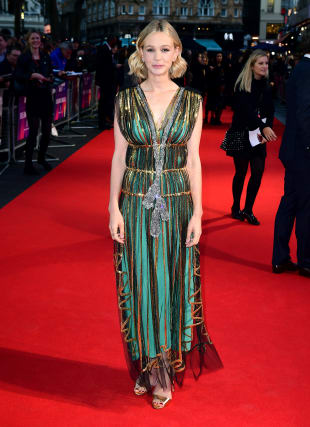 Carey Mulligan will be joined by Jonathan Pryce, Lesley Manville and Scouting For Girls, as well as a composer with dementia who recently went viral, for a virtual carol service for Alzheimer’s Society.

The actress, who is an ambassador for the charity, will host the concert, which will feature readings, carols and special guests, including Sir Trevor McDonald and composer Paul Harvey, who made headlines when videos of him playing an improvised composition using only four notes were viewed millions of times.

Mr Harvey, 80, composed the piece after being given four random notes to play by his son, Nick.

After a clip of the moment went viral, the music was released as a single to benefit the Alzheimer’s Society and Music For Dementia and has shot to the top of both the iTunes and Amazon music charts.

Game Of Thrones actor Pryce will deliver a rendition of ‘Twas The Night Before Christmas, while Manville will read a poem by Alfie Benson about his grandmother’s experience of dementia.

Scouting for Girls will perform their version of Wham’s Last Christmas, while Sir Trevor will also give a festive reading.

The service will also include a raffle with a Friends T-shirt signed by David Schwimmer among the prizes.

Support services provided by Alzheimer’s Society have been used more than 2.7 million times since March.

Manville said: “I am delighted to take part in this year’s virtual Carols at Christmas and to bring Alfie Benson’s really moving poem to life for a wider audience.

“With so much uncertainty facing us this Christmas season, it has never been more important for us to come together (even if virtually) to make sure people with dementia know they aren’t alone, and I hope as many people as possible join in on the online event on 17th December.”

Pryce added: “‘Twas The Night Before Christmas is one of my favourites, and hopefully it will serve to bring people together this Christmas.

“I really hope that everyone can support Alzheimer’s Society, to give vital help to people affected by dementia, and am delighted to join a line-up of stellar talent for the virtual event on the 17th.

“People with dementia have been hardest hit by coronavirus, so please do join in for some festive fun and support Alzheimer’s Society this Christmas.”

The virtual Carols at Christmas event will begin at 6.30pm on December 17 and taking part is free but members of the audience are asked to make a donation to the charity.

Care homes will also be provided with a free link to view the virtual event.

Tickets are available at alzheimers.org.uk