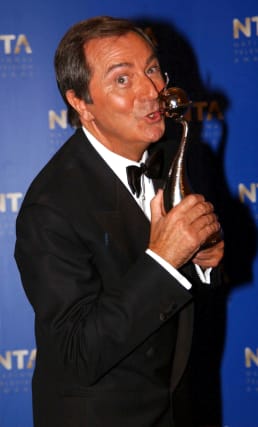 Russ Abbot has led tributes to Des O’Connor, labelling him as a “thoroughly nice man”.

The all-round entertainer died at the age of 88 on Saturday following a fall at his home in Buckinghamshire.

Comedian and singer Abbot said O’Connor’s death marked a “great loss, not just to the industry but to everyone who had the pleasure of meeting him”.

In a statement to the PA news agency, he added: “I had the privilege of being on his show many times and he was a wonderful, generous host, always wanting his guests to shine.

“He really was the ultimate entertainer but, even more, he was a thoroughly nice man.

“No ifs or buts. He always had a smile on his face and his giggle was legendary!

“He will be sorely missed. My thoughts go out to Jodie and his family.”

She said O’Connor “had the softest hands of anyone I ever met and the kindest of hearts”.

In a post on Instagram, she wrote: “He had talent in every fibre of his being and was stubborn as a mule. He was the full ticket as a friend and colleague.

“When he chose me to be his co host on the ‘Today’ daytime show it was one the greatest days of my professional life. It was an education and a privilege to work with him for the years that followed.

“We worked long hours but always laughed lots, not least because when it was showtime he would always tell me I looked like robbers dog! These years I will never forget and nor will I forget him. Darling Des you will be forever missed. Melanie x.”

They appeared on Countdown together while he hosted the Channel 4 quiz show for two years from 2007.

She tweeted: “RIP Des O’Connor. So sad this morning to hear that darling Des has passed away.

“He was the host of Countdown for a couple of years and was a joy to work with. Lively, funny, he ALWAYS wanted to entertain people.

“I will remember him most tho for his brilliant chat shows in the days when families would gather round the telly to watch , Des O’Connor was the King.

“We’d cry laughing when Freddie Starr would pretend to be behaving and things would go badly wrong. Des will surely be entertaining the angels now.

“Rest In Peace & Laughter my friend.”

Top Gear presenter Paddy McGuinness tweeted: “Such sad news. Des O’Connor was never afraid to laugh at himself and that was part of his charm. Whether it was Eric Morecambe ridiculing him, or Freddie Starr smashing his studio set up, Des always laughed along. Another part of my childhood telly viewing gone. RIP Des O’Connor.”

She tweeted: “I’m so sad to hear that the wonderful Des O’Connor has died. He was a true pro and a gorgeous person. My love to Jodie and all his family at this sad time. Rest in peace Des. You are sorely missed already #RipDesOConnor.”

“He was just a nice person to be around and a real professional.”

Comedian Paul Chuckle also paid tribute, tweeting: “RIP the brilliant Des O’Connor. From Butlins Redcoat to one of the best comedians AND singers in the business, and such a lovely guy. Sleep peacefully my friend.”

Singer Kim Wilde, who performed alongside O’Connor, tweeted: “Gorgeous memories of singing ‘Something Stupid’ with Des O’Connor. Thanks for the memories you lovely man.”

Sports presenter Gary Lineker tweeted saying: “Saddened to hear that Des O’Connor has passed away. Truly lovely man and one of the great old school entertainers.”

Actress Sophie Evans, who starred alongside him in The Wizard Of Oz at the London Palladium, tweeted: “I had the absolute pleasure of working with Des O’Connor in The Wizard of Oz. He was a perfect gentleman, with a glisten in his eye & that old school hard working mind set. He did 8 shows a week for 3 months & didn’t take a show off at 80 years old. I loved Des. What a legend.”

Northampton Town Football Club also tweeted in remembrance to O’Connor, who played for their reserve team in the 1940s.

“We are very sorry to hear of the passing of Des O’Connor,” a Twitter post on the club’s page said.

“Des famously played for our reserve team on a few occasions just after World War 2. Our thoughts are with all who knew Des.”