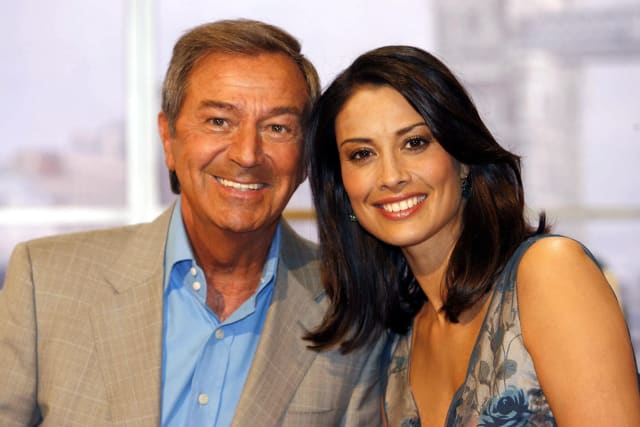 Sykes and O'Connor, who died in hospital on Saturday after a fall at his home, presented Today With Des And Mel from 2002-2006.

She said O'Connor "had the softest hands of anyone I ever met and the kindest of hearts".

In a post on Instagram, she wrote: "He had talent in every fibre of his being and was stubborn as a mule. He was the full ticket as a friend and colleague.

"When he chose me to be his co host on the 'Today' daytime show it was one the greatest days of my professional life. It was an education and a privilege to work with him for the years that followed.

"We worked long hours but always laughed lots, not least because when it it was showtime he would always tell me I looked like robbers dog! These years I will never forget and nor will I forget him. Darling Des you will be forever missed. Melanie x".

O'Connor, who was famous for shows such as Des O'Connor Tonight and Countdown, was mourned by many from the world of entertainment.

Former Countdown star Carol Vorderman expressed her sadness at the news as she recalled O'Connor saying he was "lively, funny, he ALWAYS wanted to entertain people".

In two posts on Twitter, she wrote: "RIP Des O'Connor. So sad this morning to hear that darling Des has passed away.

"He was the host of Countdown for a couple of years and was a joy to work with. Lively, funny, he ALWAYS wanted to entertain people.

"I will remember him most tho for his brilliant chat shows in the days when families would gather round the telly to watch , Des O'Connor was the King.

"We'd cry laughing when Freddie Starr would pretend to be behaving and things would go badly wrong. Des will surely be entertaining the angels now.

"Rest In Peace & Laughter my friend."

Top Gear presenter Paddy McGuinness tweeted: "Such sad news. Des O'Connor was never afraid to laugh at himself and that was part of his charm. Whether it was Eric Morecambe ridiculing him, or Freddie Starr smashing his studio set up, Des always laughed along. Another part of my childhood telly viewing gone. RIP Des O'Connor".

I'm so sad to hear that the wonderful Des O'Connor has died. He was a true pro and a gorgeous person. My love to Jodie and all his family at this sad time. Rest in peace Des. You are sorely missed already #RipDesOConnor

She tweeted: "I'm so sad to hear that the wonderful Des O'Connor has died. He was a true pro and a gorgeous person. My love to Jodie and all his family at this sad time. Rest in peace Des. You are sorely missed already #RipDesOConnor".

"He was just a nice person to be around and a real professional".