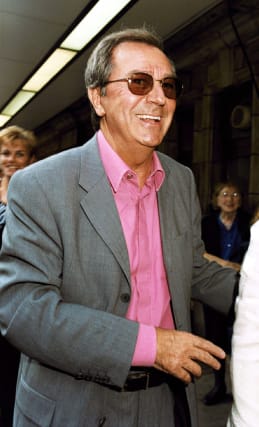 Des O’Connor, who has died at the age of 88, was an all-round entertainer whose success spanned decades.

He was a regular in prime-time television slots and he also had a string of hit singles.

O’Connor was born in Stepney in London’s East End in 1932 to a Jewish cleaner and an Irish binman. Following the outbreak of the Second World War he was evacuated to Northampton.

After completing his national service with the Royal Air Force, O’Connor had his first brushes with showbusiness when he began to appear in variety shows.

His music career began in 1967 with the release of his first single Careless Hands.

The song was closely followed by I Pretend, which came out in 1968 and went to number one in the singles chart.

In total he had four top 10 hits and went on to record 36 albums.

His talk show Des O’Connor Tonight was launched in 1977 on the BBC, where it ran for five years before switching to ITV and being broadcast in the US.

The programme enjoyed enduring success and it was last broadcast in 2002.

During the 2000s he appeared alongside fellow presenter Melanie Sykes in Today With Des And Mel, which saw the pair interview celebrity guests and run viewer competitions.

He was also known for appearing in game shows Take Your Pick and Pot Of Gold.

In 2007 he took over presenting duties at quiz show Countdown on Channel 4, where he remained for two years.

He continued working into later life and in 2012 he starred in a West End run of Dreamboats And Petticoats at the Playhouse Theatre.

That year also saw ITV broadcast a one-off special titled The One And Only Des O’Connor in tribute to his 50 years in showbusiness.

In 2015 he appeared alongside fellow variety performer Jimmy Tarbuck at the London Palladium for a charity show.

At the time of his death O’Connor was married to Jodie Brooke Wilson, his fourth wife.

He is also survived by his son Adam and his four daughters, Karin, TJ, Samantha and Kristina.