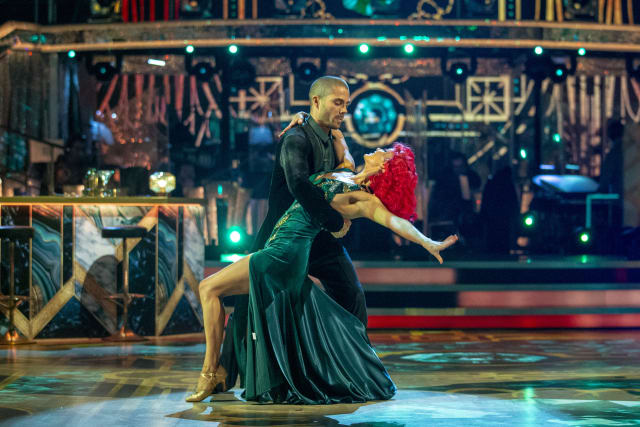 Max George has apologised for swearing in celebration following his Strictly Come Dancing routine, saying he got "lost in the moment".

The Wanted singer appeared to shout an expletive as he finished his performance in the live programme.

After dancing the American smooth with partner Diane Buswell, he appeared to shout "f****** get in" as he and the professional dancer held each other's gaze in the final pose of their routine.

After the programme, George tweeted: "Hope you enjoyed the dance guys!!!!

"I may have got a little bit lost in the moment and said a bad word.

"Apologies if that was the case! Much love!!!"

She said she would like "to apologise for some language earlier that involved Max".

"Even if you didn't hear, we're sorry on every level."

Hope you enjoyed the dance guys!!!! I may have got a little bit lost in the moment and said a bad word. Apologies if that was the case! Much love!!! X

George and Buswell's performance earned them 20 points and placed them second from bottom in the leaderboard.

Judge Craig Revel Horwood said he was "disappointed" in their effort, adding: "You lack any sense of style, actually, of flair, that this particular dance needs.

"Your arms are extremely haphazard, your hands are like spatulas on the end of them, darling."