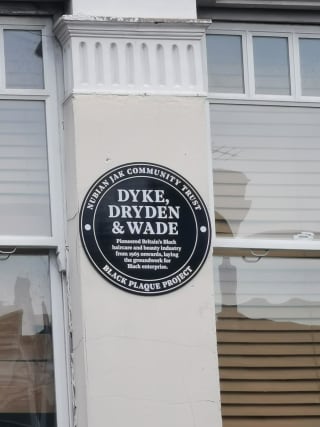 A black plaque has been unveiled to celebrate the legacy of three businessmen who created beauty and hair products aimed at black women.

The sign was put up at the site of a wig and cosmetic shop in north London which was run by Len Dyke, Dudley Dryden and Tony Wade.

The businessmen went on to sell their own products, which were sold across the UK and exported internationally.

The plaque was put up on Friday by the Nubian Jak Community Trust as part of a project to recognise significant black figures in British history.

The shop in West Green Road, Tottenham, was opened by Mr Dyke and Mr Dryden in 1965 before Mr Wade joined them as a business partner in 1968, according to the Nubian Jak Community Trust.

Their company Dyke & Dryden is said to have been Britain’s first multi-million pound company run by people from the black community.

Rudi Page, who previously worked as their sales and marketing manager, described the trio as “very determined men” who were also “really inspiring”.

“They inspired the community at the time and they were really focused on the development of young people and giving them opportunities. And I was one of those,” he said.

They were “really important” figures for the black community, he told the PA news agency.

Mr Page, 65, said they “provided a lot of jobs” to people across the UK including at their factory in Bradford, West Yorkshire.

“The economic impact was much wider than just the black community,” he said.

The plaque gives “an opportunity to focus on excellence that’s come out of the African Caribbean community here in the UK”, Mr Page said.

“It is an area rarely covered within the UK.

“The black plaque I hope will stimulate people to look again at their contributions.”

Mr Page added: “Their story can inspire all young people… who feel, in their local communities, opportunities are limited.

“It’s an inspiring legacy of determination and hope for young people today, regardless of their background.”

Last week a black plaque was put up to commemorate the pianist Winifred Atwell in Brixton, south London.