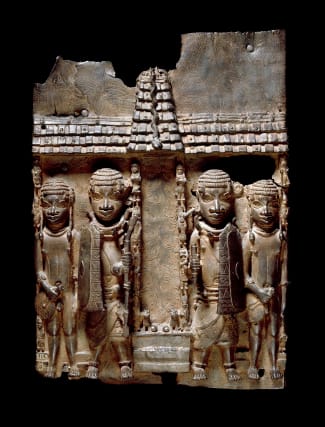 The British Museum is taking part in an archaeological dig to look for royal treasures in Nigeria – as controversy continues over its Benin Bronzes.

It will work alongside groups in Nigeria to investigate the archaeology of the Kingdom of Benin.

The British captured Benin City in 1897, now in southern Nigeria, destroying the palace and its compounds.

The British Museum has 928 Benin objects  – heirlooms stolen during the bloody invasion – in its collections.

Many of the thousands of objects looted from the city’s shrines, royal chambers and storerooms are also in the collections of museums in Europe and the US.

The British Museum has come under pressure to hand its objects back to Nigeria.

It says it is working to enable a permanent display of Benin works of art from its collection at the Edo Museum of West African Art, which is being designed by architect Sir David Adjaye and is due to open in Benin City.

The Kingdom of Benin was once one of the most important and powerful pre-colonial states of West Africa.

The ‘Bronzes’ – castings in brass and bronze – include several hundred plaques which depict narrative moments from life in the kingdom.

They once decorated the pillars of buildings in the Benin royal palace.

The kingdom’s ancient buildings and pavements lay buried below the modern city.

From next year, the Museum will help look for archaeological remains below the proposed site of the new museum, in “the most extensive archaeological excavation ever undertaken in Benin City. ”

Hartwig Fischer, director of the British Museum said: “The British Museum’s main mission is to work in partnership with colleagues from around the world to develop our shared understanding of cultural heritage.”

Professor Abba Isa Tijani, director general of the National Commission for Museums and Monuments, Nigeria, said: “(We are) very excited about this archaeological work in historic Benin, which we hope and believe will lead to a greater understanding of the ancient kingdom of Benin.”

Excavated objects will remain in Nigeria and become part of the Edo Museum of West African Art, museum collections and displays.