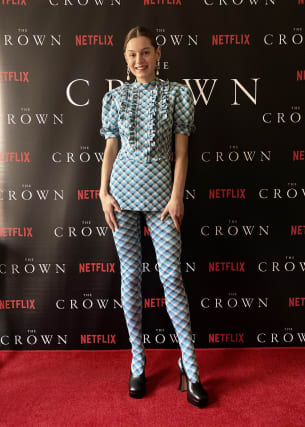 The Crown star Emma Corrin said her own early experiences with fame gave her an insight into Diana, Princess of Wales’ life in the spotlight.

Corrin, 24, bagged the biggest role of her career with a starring role in Netflix’s regal drama, appearing opposite Josh O’Connor’s Prince of Wales.

Season four of The Crown will portray the highs and lows of the high-profile royal romance.

Corrin revealed The Crown director Ben Caron warned her life was about to change with the fame brought by the show and she used her experience to better understand Diana.

Speaking during the show’s virtual premiere, she said: “Something that Josh and I were very conscious of, actually the whole of the way through the series, was we always had to remember not to play the ending, not to play the tragedy. But also, at the same time, be aware of it, I suppose.

“I think it has probably given me a certain amount of perspective on the journey I am embarking on now. I remember when Ben first gave me the part. Ben was like, ‘Your life is going to change a lot. Anytime anything happens, you get photographed or people know who you are, use it because it is exactly what happened to her.'”

Corrin, who previously appeared in ITV series Grantchester, added: “It was very useful while I was filming to be having those experiences and using what I was feeling, knowing it was what she would be feeling, too.

“But I think now I have learnt a lot about her, it is quite a similar thing. And seeing how she dealt with it or didn’t deal with it so well has helped me gain some perspective.”

Season four of The Crown launches on Netflix on November 15.