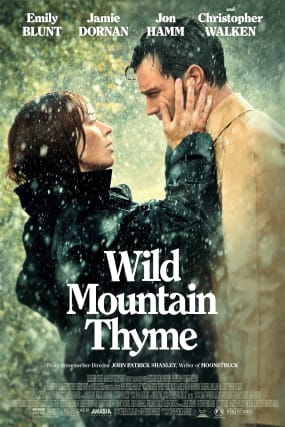 The Irish embassy in the US has joked that Emily Blunt and Jamie Dornan present “a remarkably realistic depiction” of Irish people in the trailer for their new film Wild Mountain Thyme, adding: “We are a beautiful people.”

The film, written and directed by John Patrick Shanley, also stars Jon Hamm and Christopher Walken and tells a love story set against the landscapes of rural Ireland.

Dornan, who is from Holywood in Northern Ireland, and Blunt, who is from London, play star-crossed lovers Anthony and Rosemary, whose families are caught up in a feud over a hotly contested patch of land that separates their two farms.

Anthony spends most of his time working in the fields, worn down by constant belittling, following his father’s threat to bequeath the family farm to his American cousin, Adam.

Rosemary appears to hold a grudge for having been shamed by Anthony in childhood, but her mother, Aoife, strives to unite the families before it is too late.

Before they can face their feelings, Adam arrives to romance Rosemary with a trip to New York.

The accents in the trailer have been met with some confusion, with the Irish embassy in Washington DC sharing the trailer on Twitter and writing: “To be fair, Irish accents are hard (we struggle with them at times). But otherwise #WildMountainThyme looks great.

“And, in Jamie Dornan & Emily Blunt, presents a remarkably realistic depiction, visually at least, of the average Irish man & woman. Truly, we are a beautiful people.”

“Is there such a thing as accent police? If so, somebody better call ’em. On the upside, Ireland looks nice.”