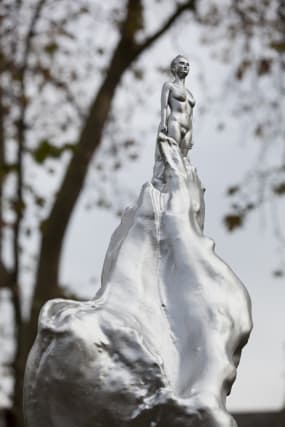 Artist Maggi Hambling has hit back at criticism of her naked sculpture celebrating the “foremother of feminism” Mary Wollstonecraft.

The artwork, cast in silvered bronze, has been unveiled after over a decade of local campaigning and fundraising.

But many questioned why the piece – said to be the world’s only memorial sculpture to Wollstonecraft – depicts a woman naked.

Wollstonecraft (1759-1797)  is known as one of the founding feminist philosophers and was the author of A Vindication of the Rights of Woman, which was published in 1792.

The sculpture has been unveiled in north London’s Newington Green, close to where Wollstonecraft lived and worked.

Organisers said the work A Sculpture for Mary Wollstonecraft “personifies the spirit, rather than depicts the individual”.

“My sculpture, I hope, celebrates the spirit of Mary Wollstonecraft. It certainly isn’t a historical likeness,” she told the PA news agency.

Hambling added: “Clothes define people, As she’s every woman, I’m not defining her in any particular clothes.

“It’s not a conventional heroic or heroinic likeness of Mary Wollstonecraft. It’s a sculpture about now, in her spirit.”

Critics include columnist and feminist Caitlin Moran who wrote on Twitter: “This is the new statue of Mary Wollstonecraft.

“It’s not making me angry in any way because I just KNOW the streets will soon be full of statues depicting John Locke’s shiny testicles, Nelson Mandela’s proud penis, and Descartes adorable arse.”

Channel 4 journalist Georgina Lee was also unimpressed with the statue, tweeting: “Because nothing says ‘honouring the mother of feminism’ like a sexy naked lady.”

However, Bee Rowlatt, author, journalist and chair of the Mary on the Green campaign, praised the statue, saying it was worthy of a feminist who deserved “a pioneering work of art”.

In a statement she said: “There’s  no question that Maggi Hambling is a challenge artist and this work is certainly not your average statue.”

“The figure is representative of the birth of a movement. She was the foremother of feminism.

“This work is an attempt to celebrate her contribution to society with something that goes beyond the Victoria traditions of putting people on pedestals.”

Hambling defended her work, telling PA: “The female figure at the top is open and challenging the world”.

“It’s the ongoing battle – a woman ready to challenge the world.”

Referencing a quote by composer Gustav Mahler, Hambling added: “Mary Wollstonecraft was clearly full of fire 200 years ago and before feminism.”

“So, the whole sculpture is about that.

“It’s like a rocket of hope going up into the sky, with all that’s still got to be done.”