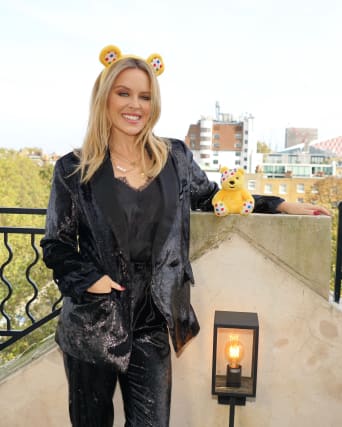 Cher, Kylie Minogue and Robbie Williams are among the stars lending their voices to this year’s BBC Children In Need charity single.

More than 20 artists have joined forces for a cover of the Oasis ballad Stop Crying Your Heart Out to help support disadvantaged children and young people across the UK.

The single, curated by BBC Radio 2’s Jeff Smith, was recorded and filmed remotely by artists across the world, from Cher in Malibu to Robbie Williams in Switzerland and Jay Sean in New York.

The backing track was performed by the BBC Concert Orchestra alongside Clean Bandit’s Grace Chatto and Sheku Kanneh-Mason on cello, and Anoushka Shankar on sitar.

It was produced by Grammy Award winning duo Mark Taylor and Brian Rawling.

Minogue said of the project: “Children In Need is such a special charity and so loved by everyone, including me. It was a privilege to take part in this recording with so many amazing artists.

“This year it feels even more poignant than ever, and I hope we can all come together to raise as much as possible.”

Cher said: “I felt very emotional recording this song, it was very important to me.”

Chic star Rodgers said: “I have a long history of doing great things with the BBC Radio 2 team and the UK is my home from home so I know exactly how important Children In Need is, and the important work they do for children throughout the UK is very familiar to me.

“When Jeff Smith asked me to participate I immediately said yes, as regardless of the pandemic we must do everything in our power to ensure there is no disruption in supporting these children.”

The track follows the success of the Radio 1 All Stars, whose charity cover of Foo Fighters’ Times Like These went to number one in the UK in May.

Net profits from that single in the UK were split between Comic Relief and BBC Children In Need.

Stop Crying Your Heart Out will have its first play on The Zoe Ball Breakfast Show on BBC Radio 2 on Friday November 13.

The music video will debut during Children In Need’s 2020 appeal show on BBC One later that evening.

It was directed by Phill Deacon who also produced the video for Times Like These, which saw the stars singing from their own homes during lockdown.